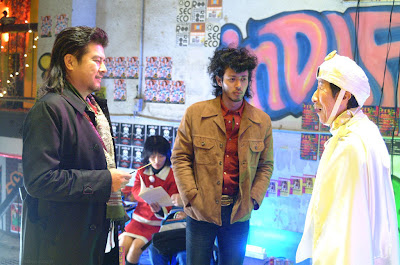 Here's some great news for Japanese film fans in Canada from the woman behind Evokative Films, Stephanie Trepanier. Evokative will be releasing Satoshi Miki's critically-praised, quirky, and very sweet 2008 comedy "Adrift in Tokyo" April 10th at Montreal's AMC Forum Theatre for a two week run, followed by a Toronto release at the AMC Theatres Yonge and Dundas on May 1st and a Vancouver release May 22nd (venue to be announced). Starring Jo Odagiri and Tomokazu Miura as a 20-something slacker and a mournful yakuza who decide to go on a walkabout through Japan's capital city has been named repeatedly on critics and bloggers top ten lists for last year, including Midnight Eye's Jasper Sharp and Twitch Film's Todd Brown and has quickly made Satoshi Miki one of Japan's hottest new directors on the international scene.

If you want to see a film that I think has the kind of crossover potential of Juzo Itami's "Tampopo" then make sure to get yourselves out to catch "Adrift in Tokyo" went it starts hitting Canadian theatres next month. Thanks to Evokative Films for the heads up on this.