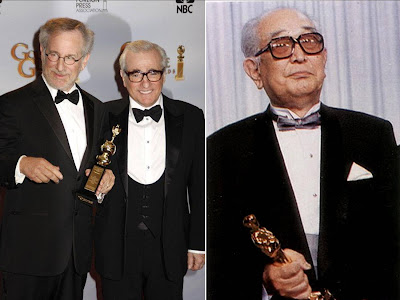 I had seen reports at the end of last week that Hollywood heavy hitters Steven Spielberg and Martin Scorsese would be attending The Cherry Blossom Gala, "black-tie extravaganza of culture and the arts" in Beverly Hills on Monday night to honour what would have been the 99th birthday of cinematic master Akira Kurosawa. I thought, "Okay, I'll wait until after it takes place, get some picks and additional details and run a story," but search as I might I can't dig up much of any follow up to the event. that being said I thought I should give it a mention before this news item gos completely cold.

Besides kicking off the year leading up to the centennial of Kurosawa's birth The Cherry Blossom Gala was also planned to inaugurate the Anaheim University Akira Kurosawa School of Film, a web-based school set up at the California University to promote the growth of filmmakers and filmmaking around the world. Guest of the event were treated to performances by a troupe of traditional Awa Odori dancers and taiko drummers as well as a live performance of Toru Takemitsu's orchestral score to Kurosawa's 1985 late epic "Ran" lead by world-renowned conductor Tomomi Nishimoto.

Of course at some point during the night Spileberg and Scorsese took to the stage and spoke glowingly of Kurosawa and his profound influence on their films and cinema in general... but damned if I have any idea as to anything lese that might have been said. If you're a reader of the blog and you were there or know more about how the evening went then by all means please contact us or leave a report in the comments.

Thanks to Anaheim University for the details we do have on this event.
Posted by Chris MaGee at 11:13 AM