"Hana yori Dango Final" plus much more coming from Discotek 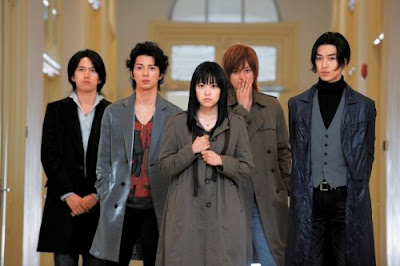 Discotek Media who have previously distributed Region 1 DVDs of such films as Sogo Ishii's "Electric Dragon 80,000V", Hisayasu Sato's "Splatter: Naked Blood" and Takao Nakano's "Killer Pussy" seems to be lightening up big time. The Florida-based distributor has just announced its latest batch of acquisitions and the crowning jewel is none other than "Hana yori Dango: Final", the last adventure of young Tsukushi Makino and her handsome rich beaus at Eitoku Gakuen Academy, and the second biggest box office film in Japan for 2008. It was only a matter of time before someone picked up this film, but I'm just kind of surprised that it turned out to be Discotek, whose catalogue leans pretty heavily towards exploitation and genre fare. Personally "Hana yori Dango Final" seems muich more like a Viz Pictures film, but c'est la vie. You'll be able to pick up the DVD on August 25th.

All you explotation and genre fans, don't go running for the door just yet! Along with "Hana yori Dango Final" Discotek will also be releasing Higuchinsky's Junji Ito-based 2000 horror "Uzumaki" and his 2003 action film "Tokyo 10+1" in September and October, as well as Junya Sato's totally trippy Meiko Kaji film "Female Prisoner Scorpion: Jailhouse 41", although no firm release date for that one has been announced.

Thanks to Anime News Network and Kung Fu Cult Cinema for the details on this.
Posted by Chris MaGee at 5:19 AM