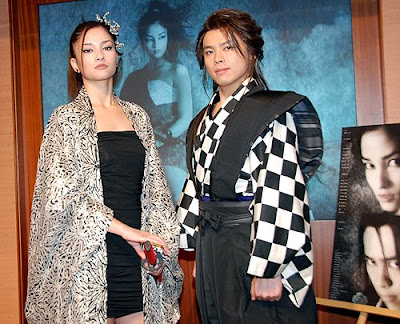 Back in February we ran a story about an upcoming Japanese stage play that asked "What if the fierce 16th-century Japanese warlord Oda Nobunaga had been a woman?" That play, "Onna Nobunaga" will be running at Tokyo's Aoyama Theatre at the beginning of June and then at Osaka's Theatre BRAVA! for a three day run between June 26th and June 28th with "Who's Camus Anyway?" and "Dance Sabaru" star Meisa Kuroki (above left with co-star Akira Nakagawa) starring as the dreaded "Demon King", or I guess in this case "Queen".

Atr a press conference held on Monday in Tokyo 20-year-old Kuroki and the rest of the cast talked a bit about what being in the play, based on the Naoki Award-winning novelist Kenichi Sato's book, was like and Kuroki let slip a rather important detail about her performance, "Okumura [Toshikazu Okamura, the plays director] told me, ‘You’re going to have to take off your clothes!’ and I’m prepared for that and want to do my best.” First a female Nobunaga, and now a naked female Nobunaga? Guess they'll be a lot of guys trying for front row tickets to this one.

Thanks to Japan Today and Yomiuri Online for the details on this.
Posted by Chris MaGee at 5:18 AM

Hi she is prety good in all she does.