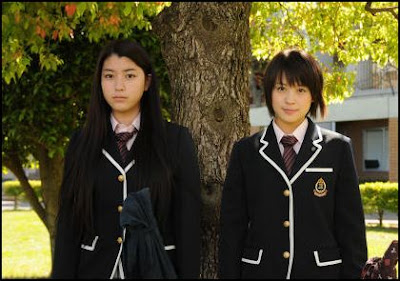 I've been following the career of 16-year-old actress Riko Narumi (above left) ever since seeing her in Koji Hagiuda's 2007 drama "Shindo (Prodigy)" opposite Ken'ichi Matsuyama. She had a naturalness and ease in that film and in almost every other film I've seen her in since, so any news of her being cast in a new project is good news for me. That's what happened today when Tokyograph reported that Narumi will be starring opposite Kie Kitano (above right) in the big screen adaptation of Tetsuya Honda's novel "Bushido Sixteen".

The story follows to young female kendo competitors, Kaori (Narumi) a veteran with various wins under her belt, and Sanae (Kitano) a newcomer. After Sanae actually manages to beat Kaori a rivalry is built up between them, one that reaches a boiling point when the two attend the same school. I'm not sure if the naturalness and ease I spoke about will translate into this Narumi performance, but with both stars undergoing two months of intensive kendo training you never know.

Tomoyuki Furumaya, who previously directed "Homeless Chugakusei", will be helming "Bushido Sixteen" which is slated for a spring 2010 release. And according to Tokyograph Honda spun this tale of rival fighters into a series of books titled "Bushido Seventeen" and "Bushido Eighteen". Looks like if enough tickets are sold we'll be seeing more of these films in the future...
Posted by Chris MaGee at 4:58 AM