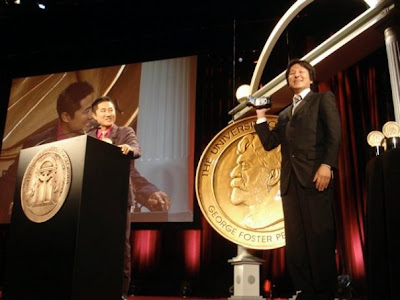 Here's a very proud moment captured on film. As we told you last month documentary filmmaker Kazuhiro Soda won the prestigious Peabody Award for his 2007 "observational" film "Campaign". The film, which aired on the PBS program "P.O.V." in July of last year, chronicles Soda's old University friend Kazuhiko Yamauchi as he jump starts his political career by running for a seat on the city council of Kawasaki, Kanagawa Prefecture. Well, on Monday the awards themselves were handed out at a ceremony held at New York's Waldorf Astoria Hotel where Soda joined the likes of "Saturday Night Live's" Lorne Michaels, "The Today Show's" Matt Lauer and Oscar-nominated actress Laura Linney for the festivities. Soda himself was joined by his "Campaign" subject Kazuhiko Yamauchi who accompanied the director onstage and captured his acceptance speech with a handheld video camera. ‘‘Even though the program focuses on a Japanese election," Soda said to the audience, "it may have inspired viewers in different countries to think about their own democracy.’’

Congratulations again to Soda-san, and thanks to Japan Today for the details on this story.
Posted by Chris MaGee at 4:58 AM