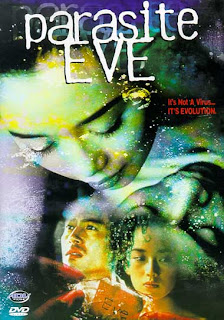 Three reasons why I considered "Parasite Eve" (the 1997 film made from the book which also spawned a couple of video games) to be Comedy Gold at about the 90 minute mark:

"What are you up to? Why are you culturing your wife's cells?!"
"We have known you since you were microorgamisms"
"The mitochondria are speaking!"

Though slow at the beginning, a bit too in love with its dull characters, filled with unnecessary camera and sound effects and containing at least three VERY drawn out suspense scenes (which actually start out reasonably well, but completely lose their steam by their climaxes), I was ready to turn around my opinion on Masayuki Ochiai's film towards the end. It was taking a pretty interesting biological concept and spinning it into a tale of microorganisms rising to take
over the world. Unfortunately it all falls down spectacularly by never quite running with the "over the top" fun that it could have generated. Even worse, it's final scene just obliterates the previous hour of the film. 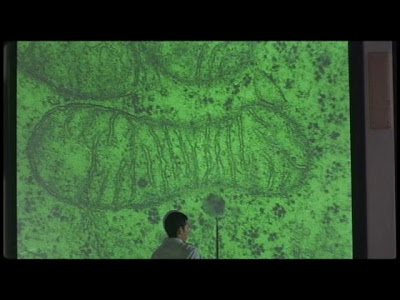 The "Parasite Eve" of the title refers to the very first woman from 200000 years ago who passed along her mitochondria to her offspring. Since mitochondria have their own DNA, they are assumed to have been a separate organism that joined with humans in a symbiotic relationship. Since they "create energy", they have helped us evolve beyond what we would have been. Of course, we find out that the relationship has really been a parasitic one and that the mitochondria have been lying in wait. What they've been waiting for, apparently, is a certain biologist and his wife. They orchestrate several events (yes, I'm talking about the small organisms within the nucleus of human cells) in order to have the biologist cultivate a large amount of mitochondria from human liver cells.

The film is a bit clumsy in setting up this sequence of events moving from plodding to poorly melodramatic (I'm starting to dread seeing Joe Hisaishi's name on music credits - schmaltzy music does not equate to audience emotional involvement), but there's always this interesting concept hanging over the plot. What if humans were indeed just hosts being used for the advancement of smaller organisms inside? One of the biologists describes how snails have numerous smaller bugs inside them and initially help the snail by building its hard external shell. Later on though, they sabotage the snail by attracting the attention of birds - this allows the snail to get eaten and the bugs to get transported in the bellies of the birds to far flung areas. The film quickly dismisses the idea of following up these concepts in a realistic science fiction style story, but that's OK because it looks like it may go the other route into pure fantastical craziness. Which it does briefly - mitochondria are so organized and work so well as a collective that they can create new human forms to seduce willing biologists - but it just doesn't run with the concept. When a character in the film says "Mitochoindria and me!? We're going to have a child.", you really need to take that to its absurd limit.

I'm not sure if an insane doomsday scenario at the end of the film would've completely made up for the rather poorly constructed initial section, but it would've at least finished on a high note. Not with a whimper.

Read more from Bob Turnbull at his blog.
Posted by Chris MaGee at 5:46 PM