"The Queen of Subtitles" Natsuko Toda 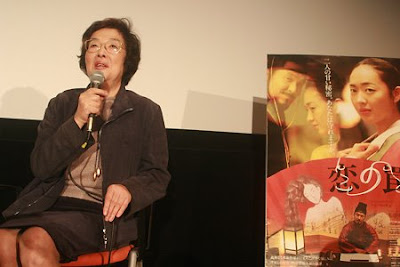 The cult of celebrity surrounding actors and directors goes back to the very beginning of filmmaking history, but as the decades went on movie audiences grew to appreciate the work of many of the other talents who collaborate to bring a film to the screen. Screenwriters like Charlie Kaufman and Paul Haggis have recently become celebrities in their own right while the names of master cinematographers like the late Roger Deakins and Christopher Doyle can sell a film to cinephiles just as easily as the director or star; but who would have ever thought that a translator and subtitler would gain celebrity status? In Japan that is exactly what's happened to 71-year-old Natsuko Toda. Working professionally since 1970 Toda is now known as "The Queen of Subtitles" to millions of film fans in Japan, but her work has gained just as many detractors as it has supporters.

Born in Fukuoka in 1936 Toda's mother moved the family to Tokyo after Toda's banker father died during WW2. There Toda grew up loving movies, especially ones from Hollywood, and it was through watching them that she also fell in love with the English language. Once Toda attended Tokyo's Ochanomizu University she knew that she wanted to combine her dual passion for films and English and the best way to do that was through a career as a film translator and subtitler. Apprenticing for many years after her graduation Toda eventually became the head of her own stable of translators who have since gone on to subtitle such blockbuster films as James Cameron's "Titanic", Steven Spielberg's "E.T." and "Schindler's List", and all of the "Harry Potter" series. She's also sat side by side with such stars as Jane Fonda, Tom Cruise, Brad Pitt, and Tom Hanks acting as a translator and interpreter during news conferences, interviews, and events.

While Toda has spoken often of her love for her work the film studios in the U.S. haven't always made her work easy for her. Often she and her subtitling crew only get about 10 days to translate and subtitle a film, and if it's a major production that is going to be released simultaneously in both North America and abroad the turnaround can be even more last minute. Meanwhile cultural subtleties and things as basic as humour can often present major roadblocks in Toda's job. In a very interesting interview with Toda posted at Metropolis she explained, "Jokes never translate well. Try a typical Woody Allen joke on a Japanese audience. You have to explain why it is funny, and in doing so, it loses its impact."

It may have been due to the inherent difficulties of her trade, or Toda's unorthodox working methods (while most translators use a computer to assist them Toda writes her translations long hand while viewing a film), but in 2002 she found herself in very hot water over a very high profile film. It was late in that year that New Line Cinema and director Peter Jackson started to receive complaints from Japanese fans of the first film in Jackson's screen adaptation of J.R.R. Tolkien's "Lord of the Rings". The subtitles for "The Fellowship of the Ring" they said were botched - words were mistranslated, meanings of sentences were severely glossed over, and most importantly to Tolkien fans the invented languages and history of Middle Earth were butchered in the subtitles. Upon taking a look at the print they saw exactly what they were talking about. Jackson spoke out against Toda and she was subsequently fired from providing translation/ subtitles for the next two films in the trilogy. Toda did her best to defend her skills as a subtitler, saying that it is nearly impossible to give literal translations of English dialogue as the subtitles would disappear from the screen before people had a chance to read them. Sadly Toda's reputation has yet to recover internationally from this scandal.

Love her or hate her Natsuko Toda has definitely accomplished what few in her trade have managed to do: achieve fame both at home in Japan and abroad, and inspired a whole new generation of women to consider a career behind the scenes in the film industry.
Posted by Chris MaGee at 5:48 PM