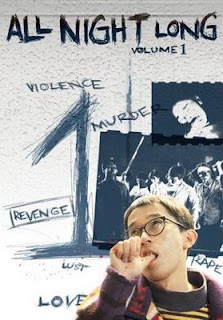 "All Night Long" is yet another youth-oriented film that focuses on the harmful consequences of bullying and alienation. Its main characters are three teenage misfits who are brought together by a violent incident. They form a sort of friendship and agree to host a party together – on the condition that they all bring dates. Over the next week, they each struggle to approach their ideal girls. Some progress is made, but the boys’ efforts are halted when they become victims of needless cruelty, pushing them to retaliate.

The story of "All Night Long" is quite familiar, as are its painfully awkward social outcasts. The three boys come across as a veritable trio of Travis Bickles who are trapped by their own insecurities. Additionally, the worldview portrayed is often quite pessimistic and hostile, most explicitly spelled out by one character who describes its inhabitants as maggots who deserve to be cheated. The film is populated by an array of freaks, geeks, tormentors and all-out psychotics who are mainly classified as either those who bully or those who are bullied.

"All Night Long" works best when gradually developing the three boys, particularly in the lengthy segment leading up to the party when they attempt to collect their dates. Tetsuya, the bespectacled, top grade-achieving student, is the most insecure one of the bunch and, as a result, the most interesting one to watch. On the day after the decision to find and bring girls is made, he is shown with his head on his desk, crippled by the monumental task that lies before him. He asks for help from a creepy, squinting fellow student whose shady, manipulative methods disgust Tetsuya even when they get him what he wants. The other two boys include a promising career chaser and an unemployed slacker who is often shown lounging around his parents’ spiffy home. Judging from the boys’ various backgrounds, the film could be seen as a warning that good grades, ambition and wealth aren’t enough to properly prepare one for life’s harsh realities. 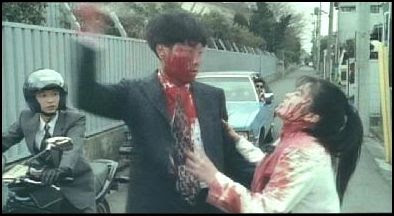 However, these so-called realities definitely stand out as some of the film’s main weak points, since they are mostly quite ridiculous. For example, the violent incident that first unites the boys (a man suddenly stabbing a girl to death at a railway crossing for no reason) is so totally drastic and out-of-nowhere that it left me quite dumbfounded when it happened – which might have been the filmmakers’ intention, but can one say the same about the sheer, near-hilarious absurdity of the scene? There are also the separate misfortunes that ruin the boys’ prospects of bringing their dates to the party, the most serious one being the sexual assault and murder of a girl at the hands of a gang. The unusual abruptness of such moments makes them feel extremely contrived, thrown into the film to clumsily emphasize the boys’ outcast status and quicken their all-too-predictable transformation into vengeance-seeking crusaders. These scenes don’t quite work as well as they could have, and they act as a disservice to the slower, more thought-out ones that gradually build up the young characters.

"All Night Long" takes up the often-repeated messages that violence makes violence (emphasized a little too deliberately in its final act) and people who don’t fit in should be treated well lest they seek revenge through extreme and heinous means. This territory has been covered in previous films like "Taxi Driver", "Falling Down" and, from more of a youth-based perspective, "Rebel without a Cause" (not to mention the Japanese "All About Lily Chou-Chou" and "Bright Future"), but it can certainly be said that all of those films handled their subjects much more eloquently. "All Night Long" does contain a good share of perceptive and interesting material, but its execution could have been better. Regardless of its weaknesses, it managed to spawn a long line of similarly-themed sequels, many of which having been released straight to video because of complaints made over its content. If that bit of news is any indication, then it’s logical to assume that the series hasn’t let go of its shocker tactics so easily (not to mention the fact that all five of the following films were helmed by the first one’s writer/director Katsuya Matsumura). Therefore, while I’ll probably catch the next entry at some point, I won’t be in too much of a rush to do so.

Read more by Marc Saint-Cyr at his blog.
Posted by Chris MaGee at 5:51 PM