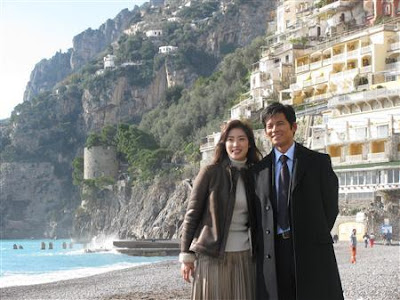 I have to admit that I wouldn't normally jump up and down for a film like “Amalfi: Megami no Hoshuu” (opening in Japan on July 18th). It stars Yuji Oda (Bayside Shakedown) as a Japanese diplomat who is trying to track down a kidnapped woman, played by Yuki Amami (All About My Dog). Now I say I normally wouldn't jump up and down about this kind of film... if it wasn't actually being shot along the Amalfi Coast of Italy. According to Japan Today the film, being directed by Hiroshi Nishitani (Star Reformer, Yôgisha X no kenshin) and being produced by Fuji TV, marks the first time a Japanese production has been filmed entirely in Italy. Hooray for firsts, I guess.

Along with it being the first Japanese film to be shot on Italian soil Fuji TV and NTT DoCoMo are planning a prequel to “Amalfi: Megami no Hoshuu” to be made available exclusively through the cellular provider's video service on June 5th. Titled "Amalfi: Beginnings" it is set in Macao, but no word if it was shot entirely in the the Special Administrative Region of The People's Republic of China.
Posted by Chris MaGee at 4:13 AM