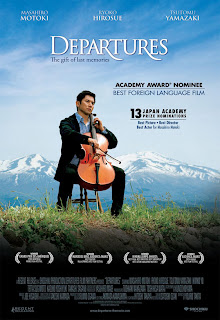 It was very much a delightful surprise to see "Departures" overturn expectations and take home the Oscar for 2008’s Best Foreign Language Film (I had a feeling it would either be the animated "Waltz with Bashir" or the highly celebrated Austrian entry "Revanche"). Yet, happy as I and other members of the J-Film Pow-Wow were for Japan ’s victory, there still remained those familiar, ever-present questions at the back of my mind: is it any good? Did it in fact deserve the honor, or did the Academy make yet another blunder in this category?

Though I can’t accurately answer the latter question since I haven’t yet seen any of the other nominated films, I can at least say this: "Departures" is a very good film, but not a perfect one. It narrative follows Daigo, a cellist who, after the Tokyo-based orchestra he worked so hard to get into is disbanded, is forced to move back to his hometown in Yamagata Prefecture with his wife, move into his father’s old coffee shop and find a different job. A misleading ad that sounds like it’s for a travel agent job lands him at a business devoted to the ceremonial preparation of death bodies before cremation. As Daigo becomes familiar with his new boss (Tsutomu Yamazaki in a scene-stealing performance) and coworker and is reunited with old acquaintances from his childhood (including the proprietress of the neighborhood bathhouse) he gets used to and eventually learns to appreciate the responsibilities of his unusual new trade – all while attempting to keep it a secret from his wife. Additional complications arise in the forms of people’s disapproving attitudes towards the job and Daigo’s memories of his father, who motivated him to begin playing the cello shortly before abandoning him and his mother. 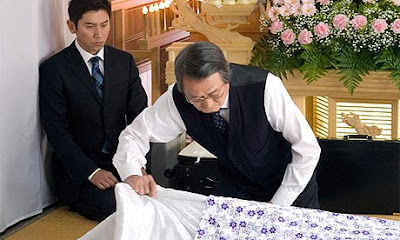 "Departures" pretty much fulfills any expectations one may have of it being a sentimental, feel good-type film – which isn’t necessarily a bad thing. While devoting ample attention to its characters, the screenplay (written by Kundo Koyama) moves along at a mostly steady pace and provides an even mix of heart-warming moments and solid humor. In fact, the film is quite funny, taking good advantage of the more unusual aspects of Daigo’s new job and often drawing hearty laughter from a mere gesture, line, deadpan expression or cut (it might be said that the Japanese trait of minimalism is here cleverly put to good comedic use). The likeable Masahiro Motoki is well chosen for the lead role, exuding the right amounts of timidity, awkwardness, embarrassment, and solemnity at all the right moments. Of course, the film has its fair share of serious scenes, predictably but ably using its central subject of death as a way of illuminating certain aspects of life. The sequences dedicated to the ceremonies in which bodies are carefully prepared for the afterlife work especially well, be it through the commendable attention to detail in showing the various steps and procedures involved or the more character-based elements regarding the gathered guests and their relationships with the deceased.

As I mentioned before, "Departures" is not a perfect film, and one can easily pick out its evident weaknesses. At times it is fairly clunky and heavy-handed, driving its comforting morals home a little too bluntly. There is also the character of Daigo’s wife (Ryoko Hirosue), who often seems painfully simplistic and poorly written, a fate that, as friend and Pow-Wow founder Chris MaGee pointed out, often falls upon the sidelined wife role. But such weak points are to be expected from a film such as this, and it could have gone much further overboard with the tear-jerker tactics and clichéd, overly convenient plot twists than it actually did.

Being no great fan of the formulaic films that the Academy so often throws awards at, I could have been a whole lot crueler to "Departures" (like Tony Rayns, who expressed much dismay towards it in his review in Film Comment). But to do so would be to discredit its noteworthy positive aspects. The film does succeed in being quite moving and maintains a convincingly sincere tone, touchingly conveying strong messages not only about life and death but also respect, duty, responsibility and love. Its ambitions may be simple and obvious from the outset, but overall it fulfills them handsomely.

Read more by Marc Saint-Cyr at his blog.
Posted by Chris MaGee at 3:25 PM