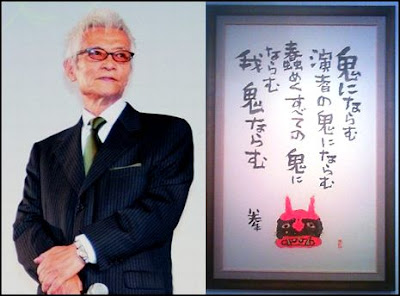 The Japanese film industry is still reeling from the death of Ken Ogata. The veteran actor, star of over 75 films and television dramas, passed away in October after a lengthy battle with pancreatic cancer. There's been months of mourning, but now Tokyo's Akasaka Yuu Gallery is giving people the opportunity to once again celebrate Ogata by showcasing one of his lesser known talents. The gallery has just opened an exhibit of 30 calligraphic paintings by the late star titled "Children Ink". From the example above and the additional examples at the exhibit's official site you can see Ogata's truly creative and playful mind at work.

This isn't the first time that Akasaka Yuu Gallery has featured Ogata's paintings though. Ogata was a longtime friend of the gallery's owner, Rin Takanori. Showings of Ogata's work have taken place there in 1991 and again in 1993, so there's no better venue for this posthumous exhibition.

"Children Ink" runs from June 11th to June 20th at Tokyo's Akasaka Yuu Gallery. Thanks to Cinema TOday for this story.
Posted by Chris MaGee at 3:24 PM