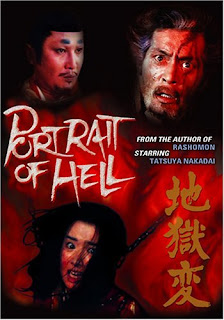 "How could you possibly witness the agonies of Hell with mere mortal eyes?"
"I saw it everywhere; it was all around me."

I love a good title that has multiple meanings. Shiro Toyoda's "Portrait Of Hell" stretches beyond just the interpretation of Hell created by a painter, but it also chronicles the hellish existence of that same artist, his daughter and of the lord of their land. Considering the historical placement of the story, the title may also be looked at as a description of the existence of the entirety of Japanese society during that era. As the painter Yoshihide says to the lord at one point (when asked to paint a mural of paradise), "There is no heaven in this world".

About a millenium ago, the Fujiwara clan was at the height of its power. As is typical of people with power, they looked to preserve it by keeping things as static as possible. This of course can cause great harm to many of the citizens - during this era, even small natural disasters would end up with many dead, terrible famines and spreading diseases. This preface to the story provides some solid background to why "the common people lived lives of hopeless despair", but apparently the nobility as well lived lives of perpetual dread. Was their power slipping? What would happen to them? Is the life of the film's paramount lord a different kind of hell when he can never trust anyone and lives in constant fear? 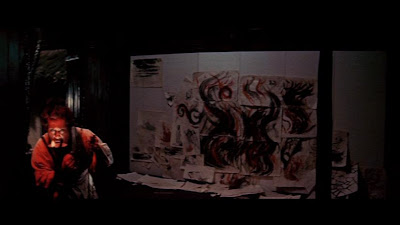 We meet the lord at the beginning of the film as he is being entertained at a festival. He is vain and arrogant and obviously has no regard for anyone but himself. As he departs, the common people who live in the area are pushed aside and one particular old beggar man is killed. We next meet Yoshihide and his daughter Yoshika. The painter is filled with his own sense of pride - in particular his Korean heritage - and would rather lock up his young daughter than allow her to be courted by one of his young Japanese proteges. She escapes, but is captured by the lord who makes her one of his concubines. This sets up the clash between lord and artist for the rest of the film as they play a cat and mouse game with each other's weaknesses. Yoshihide paints a picture of the dead beggar and the lord is haunted by an apparition that emanates from it. After destroying the picture, the lord asks him to paint a mural of paradise on the walls of Muryoju-in Temple. Yoshihide refuses since he says that he cannot see paradise anywhere in the kingdom. In the end, they agree that he will paint a mural of Hell - the lord mocks his ability to properly represent Hell while Yoshihide believes that the stronger the representation, the better chance he has of regaining his daughter.

Without using any special effects short of lighting (sudden shifts to shadows, red glows on faces, etc.) and some double exposures, Toyoda creates an amazingly disturbing environment and effective ghostly presences. Not to mention a highly entertaining storyline. The horror of the film seeps into the viewer slowly, so when the really frightening images or situations occur they don't need to jump out at you. It's the gradual understanding of what has happened to these people's lives that is terrifying. As Yoshihide struggles to paint his masterpiece, he tries to gain inspiration by torturing his servant. However, he can't completely finish his painting until he realizes that he doesn't need to create hellish circumstances for others - he's living them already himself.