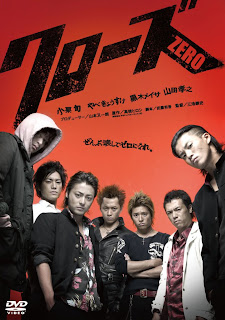 In 2001 maverick filmmaker Toshiaki Toyoda adapted Taiyo Matsumoto's 1998 juvenile delinquent manga "Aoi Haru (Blue Spring)" to the big screen. The resulting film starred Ryuhei Matsuda and Hirofumi Arai as two former boyhood friends who battled it out for supremacy at a terrifying high school. While the blooming sakura trees out front may have fooled outsiders the interior of the school looked as if it was a bombed out war zone with doors kicked off hinges and black graffiti sprayed-painted everywhere. Sure there had been umpteenth "teens gone wild" films made over the years in Japan (Ko Nakahira's "Crazed Fruit", Yasuharu Hasebe's "Stray Cat Rock: Sex Hunter", and Mitsuo Yanagimachi's "God Speed You Black Emperor" to name but a few), but Toyoda's "Blue Spring" may have been one of the best. It was bleak, pessimistic, violent and wonderfully exciting mostly because the students of this school were so damn scary. Watching these kids beat each other to a pulp in the hallways, stabbing each other in bathroom stalls, and engaging in a dangerous rooftop test of manhood involving standing on the edge of the building and letting go of a railing while clapping gave audiences the same gruesome thrill as watching a slow motion car wreck. The only reason I mention "Blue Spring" is becuase of another manga adaptation that superficially bares a strong resemblence to it. Six years after Toyoda adapted "Aoi Haru" Happinet Pictures and Toho produced another adaptation of one of Japan's most popular juvenile delinquent manga, Hiroshi Takahashi's "Kurōzu (Crows)" that ran from 1990 to 1998 and laid the ground for Matsumoto's disturbing tale. Sadly, this time around the end result of this adaptation, Takashi Miike's "Crows Zero" was far from the chilling experience of Toyoda's "Blue Spring"... very, very far. 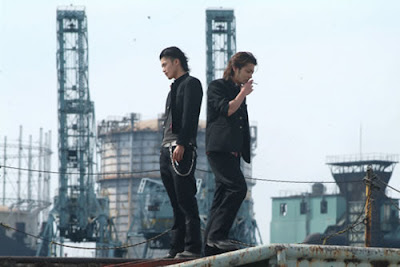 The action of "Kurōzu (Crows)" revolved around the students of Suzuran High, a boys school where fighting and general bad behaviour seems to be the only thing on the curriculum. Miike's "Crows Zero" follows two factions as they fight over who will be "king" of Suzuran - The Serizawa Army, led by Tamao Serizawa (Takayuki Yamada) known throughout the school as "The King of Beasts", and The GPS, led by Genji Takiya (Shun Oguri), a new transfer to the school who wants nothing more to oust Serizawa as the number one badass of the hallways. His strategy? Don't be one of the dozens of young contenders who challenge Serizawa to impromptu battles. Instead win these wannabes over, one by and, and then united topple Serizawa from lofty place as leader of Suzuran. Good concept, huh? I thought so, especially when you mix in some yakuza (with their leader played by Miike regular Kenichi Endo) and a gallery of colourful young chimpira. The problem is that the set up is promising, and for anyone who had already seen Toyoda's "Blue Spring" will immediately catch the visual cues of what will hopefully be a topper to that film. There's the blooming cherry trees out front, the spray-painted hallways, the surly, snarling boys in black high school uniforms, and a power struggle between two young men over who will be the A#1 alpha-male, but in the hands of Miike this could be astounding! Once things get underway, though, the menace is cut with goofy comedy, the barren sets are captured with a slick, calculated camera, the action, though sudden and powerful fades quickly and even an annoying, if drop dead gorgeous, female love interest in the form of Meisa Kuroki is injected into the fray. Now to be fair, I'm unfamiliar with the source manga for "Crows Zero", but I was expecting a film that would shake me, disturb me, and lock my attention for its 129-minute run time... but...

For a filmmaker with the kind of reputation that Takashi Miike has you'd expect a film that matched, or more likely topped, Toyoda's "Blue Spring" for it's brutality and daring. This is the man who brought us such contemporary classics as "Audition" and "Gozu" after all, but while I really liked Miike's "Big Bang Love Juvenile A" and "Scars of the Sun" I've noticed this once notorious cinematic bad boy become more and more middle of the road, or should I say that the reality of Miike the filmmaker is starting to eclipse Miike the auteur. The fact of the matter is that Mike has never been an auteur. The super prolific director works so much because studios like the fact that he can jump into a project midstream with a script completed and a cast attached, work quickly, efficiently, often bring the film in on budget and many times before schedule, and he can give the end result a liberal sprinkling of his usual visual flare. Miike a journeyman director? Well, often times yes, but then again so were Seijun Suzuki, Yasuharu Hasebe, Kinji Fukasaku and many other of Miike's cinematic forefathers. When these filmmakers got it right they created modern masterpieces, but when they got it wrong the films ended up being middling at best. In the case of "Crows Zero" Miike delivered a middling film. One that made a ton at the Japanese box office, yes, and even spawned an equally successful sequel, but still it feels like an overly slick, mix and match, and in the end dull entry into Japan's juvenile delinquent filmography. Sorry Miike, Toyoda's "Blue Spring" beat you to this one - hands down.
Posted by Chris MaGee at 3:41 PM