REVIEW: The Face of Another 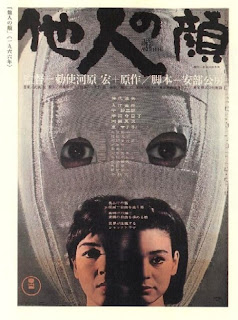 "We would all be strangers to one another," observes Dr. Hira (Eiji Okada) to his handsome, bearded patient Okuyama (Tatsuya Nakadai) as they sit in a German style beer hall guzzling steins of beer, "Constant solitude would become our normal condition". Taken out of context it would be an odd observation with everyone enjoying a night our getting a little bit drunk on whatever's flowing on tap, but this scene that comes at about the halfway point of Hiroshi Teshigahara's 1966 film "The Face of Another" sums the film's moral skeleton: If you had total anonymity or if you could be someone else what would you do? Or more precisely, what wouldn’t you do? In our internet age where were can re-embody and recreate ourselves in chatrooms and with avatars in simulated reality games like Second Life it's a question that is more timely than ever. Behaviour as innocent as grown adults flaming each other on message boards to the disturbing trend of online child predators can all, I think, be explained by the effects of a perceived mask of anonymity, and "The Face of Another" addresses this head on. 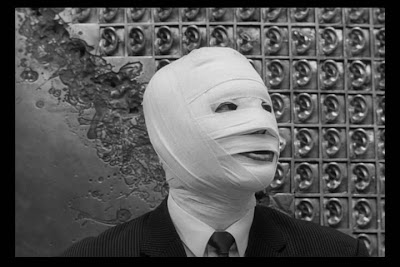 Business man Mr. Okuyama has suffered a disfiguring industrial accident that has literally stripped his face from his skull. Swathed in bandages he is sullen, misanthropic mummy, constantly needling his wife (Machiko Kyo), an amateur gemologist, and co-workers with paranoid delusions that he has become a pariah to society. Watching Nakadai, even covered in gauze, and Kyo sparring with each other is pure bliss. Yes, their marriage is falling apart and some of their exchanges are a tad wordy, but these scenes perfectly establish what's at stake in this situation. It isn't until Okuyama's psychiatrist, Dr. Hira, makes him the proverbial “offer he can’t refuse”, by creating an experimental plastic facial prosthesis, a “mask” based on the face of a total stranger, that Nakadai's character comes to life again… but at what cost? His psychiatrist is convinced that his new invention, however revolutionary it may be, could destroy human morality precisely because this “mask” will free its wearer from any sense of accountability, but Okuyama insists repeatedly that "I am me!"

Following in the tradition of such stories as “Dr. Jekyl and Mr. Hyde” and “the Invisible Man” we watch as Okuyama’s insistence of his own identity, mask or no mask, begins to crumble as he pushes the boundaries of his new alter ego. He takes an apartment where "the mask" can live, his actions in public become bolder and more risky, he even attempts to test his wife's fidelity by seducing her as this handsome, bearded stranger. Although Teshigahara and Kobo Abe (who wrote the screenplay based on his novel) chose to repeatedly cut to a parallel story line of a scarred young woman who survived the bombing of Nagasaki that may heighten the mood of the film, but ultimately distract from its main premise "The Face of Another" is a landmark to real and lasting science fiction. No, there are no futuristic space battles, time travel, aliens or any other such superficial trappings of contemporary cinematic sci-fi. Instead we have a the simple premise of what life would be like if we could live it behind a mask. Great science fiction is based precisely on these simple questions, simple speculative technologies that can revolutionize basic human dilemmas. Watching “The Face of Another” it's nearly impossible not to see the themes of identity theft, the dangers of anonymity and paranoia as early echoes of our internet age... all 30 years before the fact. There are very few films of this power out there, so take this as a strong recommendation - Rent this film now!
Posted by Chris MaGee at 3:19 PM