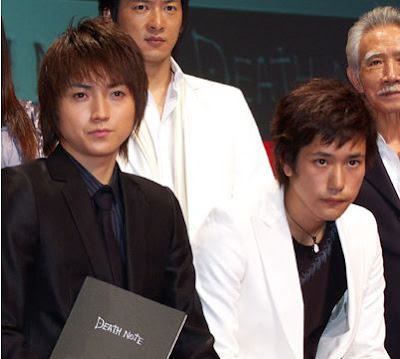 We've been keeping tabs on Toya Sato's live-action adaptation of Nobuyuki Fukumoto's manga "Ultimate Survivor Kaji" since it was announced back in October (you can read our coverage here). I have to be honest and say that I haven't been terribly excited about this project. Maybe it's because I am totally unfamiliar with the source manga, possibly because the plot line that revolves around a gambler and petty thief (to be played by Tatsuya Fujiwara) who is persuaded to board a gambling cruise in order to pay down a huge debt just doesn't resonate with a guy who barely buys lottery tickets, let alone gamble huge sums of money. Regardless of my apathy about "Kaiji" today news came via Tokyograph about a bit of casting that will reunite Fujiwara with one of his most famous co-stars.

Ken'ichi Matsuyama will apparently be starring opposite Fujiwara as Kaiji's fellow gambler, Sahara. Of course the two are famous for their respective roles as super detective L and death dealing high school student Light Yagami in the two "Death Note" films directed by Shusuke Kaneko. Those two films were huge hits across Asia, so I'm assuming that producers of "Kaiji" are hoping that a little of that magic will rub off on this manga adaptation.
Posted by Chris MaGee at 4:54 AM