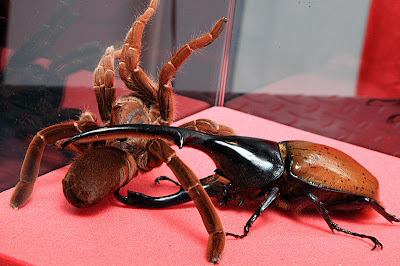 I've known about the "Mushikotei (Bug Emperor)” DVDs for a while now. Put together by author and tarento Fuyuki Shindo the DVDs feature various large and exotic bugs fighting in sumo-inspired matches. Kinda cruel, I know, and that's the one reason that I've avoided reporting on them for the longest time. It was an underground DVD phenomena, so that's where I thought I'd leave it, but now it looks like "Mushikotei" is going big time, or at least big-ish time.

According to Nippon Cinema Shindo has now upped the stakes and has put together matches featuring poisonous insects and spiders like "Giant Stag Beetle vs. Tarantula" (above) and has turned it into a feature film that will be getting a limited run at Shinjuku's K’s Cinema starting this Saturday. With this new poisonous twist the matches are apparently taking place in plexi-glass boxes and there'll be cheerleaders.

So, blame it on a slow news day, but there's my one and only report on "Mushikotei (Bug Emperor)”. YouTube is loaded with videos of matches, but I'm not embedding any of them here. Add "Mushikotei" to the dusty shelf with those old "Guinea Pig" videos, and the disturbing trend of Japanese comedians wearing black face and let's be done with it.
Posted by Chris MaGee at 4:30 PM