REVIEW: Resurrection of the Golden Wolf 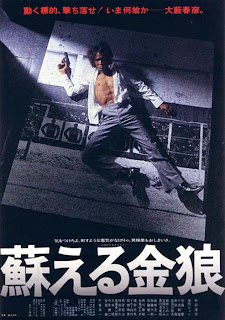 There are a lucky few of you out there who like your jobs. The pay's good, the work's stimulating and generally your job gives you a feeling of fulfillment and self worth. Let me just say you're the lucky minority with most of us plebs looking forward to each Monday morning like we look forward to a colonoscopy or a tax audit. We crawl through the five days in the office or on the assembly line waiting impatiently for the weekend and daydreaming during our daily commutes about winning the lottery, about getting even with our bosses, about somehow rising above our daily grind. For most of us these are only daydreams, but Asakura, the man at the center of Toru Murakawa's 1979 thriller "Resurrection of the Golden Wolf", isn't content to knuckle under to life as an office drone and he turns his daydreams into a glorious, frightening and violent reality.

Yusaku Matsuda, Japan's answer to such 1970's Hollywood anti-hero actors like Robert DeNiro, Al Pacino, and Jack Nicholson, stars as a bespectacled and buttoned down accounting clerk at a large oil company named Towa. He's the kind of stereotypical salaryman type who'd take decades to work his way up the corporate ladder if, and only if, he is noticed by his superiors, and in Asakura's case that's not likely. The thing is, though, there's something lurking under behind Asakura's mild-mannered exterior, something secret, something scary. The company has just had 100 million yen stolen during a standard bank drop and low and behold it's our meek little accounting clerk who's behind it. Actually he's hardly meek. During off hours Asakura is a chiseled, sunglass-wearing tough guy with a mop of curly black hair that he keeps hidden at the office under a wig... and a handgun hidden in his jacket which he has no qualms about using. 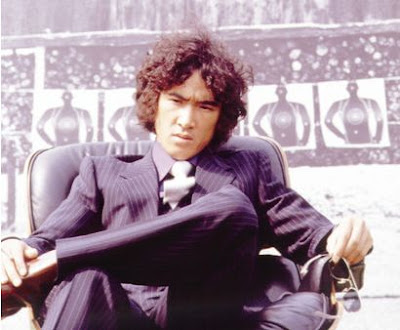 What Asakura thinks is the happy ending of his revenge on his employers is in fact just the beginning as within the first 10-minutes of "Resurrection of the Golden Wolf" he discovers that each and every yen he's stolen has been logged and numbered so it's impossible for him to spend it. It's this simple safeguard that sends Shuichi Nagahara's script, based on the novel by Haruhiko Ooyabu, into a series of twists and double-crosses that would have Niccolò Machiavelli nodding with appreciation. Not being able to simply walk off with his stolen cash Asakura must exchange it for something of equal or even greater street value, in this case pure heroin. His pursuit of wealth and ultimately freedom from his life of drudgery has Asakura using the head of the mistress of the president of Towa to get valuable info on the company, but Asakura finds himself in line with another blackmailer, Sakurai (in a small but pitch perfect performance by Sonny Chiba). Soon Asakura is in the middle of major corporate espionage, but his near sociopathic resolve to stick it to his employers not only has him swimming with the other sharks, but chewing them up and spitting them out.

Matsuda in "Resurrection of the Golden Wolf", wearing his leathers and sunglasses, his unruly long hair cascading around his handsome features, is as iconic an image as any of the screens most well known heroes (or in this case villains, depending on how you see things). Asakura follows in the same grand tradition as other cinematic alpha males like James Bond, Dirty Harry, or John Rambo; characters, or should I say caricatures, of unabashed masculinity and rebelliousness that male audiences can vicariously live through. These are men who flaunt, instead of bottle up, their testosterone, and they manipulate, disregard or just plain destroy the polite social order that surrounds them... and get the gorgeous girl at the same time. But while North American work-a-day types cheer on these heroes who get the kind of pay back that eludes so many of them Japanese audiences know that Asakura's complex plot to liberate himself from his starched, stifling office prison will ultimately end in ruin. In Post-War Japan life is about compromise, subservience and harmony maintained at all costs, so a someone like Asakura can only expect to be put in place as in the old Japanese adage "The nail that sticks up must get hammered down".

Like Toru Murakawa's other Yusaku Matsuda blockbuster "The Beast to Die" the narrative in "Resurrection of the Golden Wolf" doesn't always add up and Asakura's true motivations remains a bit murky, but with a gun in one hand and a beautiful woman in the other the film leaves more than enough escapist fun for downtrodden, cubicle bound men out there (Japanese or North American), which in the end is exactly who "Resurrection of the Golden Wolf" is geared towards.
Posted by Chris MaGee at 4:32 PM