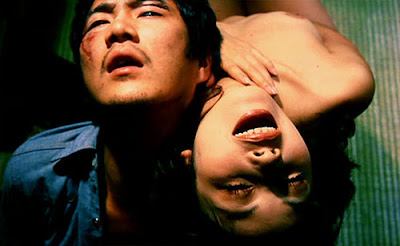 This story from Wildgrounds comes at a perfect time. Recently at the Shinsedai Cinema Festival (and it seems a good few occasions before that) I've gently debated back and forth with my esteemed co-programmer Jasper Sharp about filmmaker Koji Wakamatsu. See, Jasper's a big fan and I'm not. While he sees the artistic melding with the political in Wakamatsu's films I see exploitative violence and sex. We try and convince each other of the pros and cons of Wakamatsu's films, but we never really gain any ground either way. In the end we agree to disagree. So that's my story, or should I say preamble to the news from Wildgrounds.

It turns out that Paris-based distributor Blaq Out/Dissidenz is going to be releasing 14 films by Wakamatsu starting with a 4-disc box set featuring 1965's "Secrets Behind the Wall" (1965), 1966's "The Embryo Hunts in Secret", 1967's "Violated Angels", and 1969's "Go Go Second Time Virgin". That set will be followed up by more including restored prints of "Season of Terror", "Violent Virgin", "Running in Madness, Dying in Love", "Naked Bullet", "Violence Without A Cause", "Sex Jack", "Shinjuku Mad", "The Woman Who Wanted To Die", "A Pool Without Water", and "Ecstasy of Angels" (above) - more than enough to keep any Wakamatsu fan glued to their TV for hours and hours. I've hunted around to see if there's any indication if these sets come with optional English subtitles, though, and I can't seem to see any indication that they are. That's not to say there aren't English subs, just that Blaq Out/Dissidenz isn't being very clear with that crucial piece of information. So, if you;re out there folks at Blaq Out/Dissidenz, let us know!
Posted by Chris MaGee at 4:35 PM

I inquired, and they said no English subs on the DVDs, just the VOD versions.

Hello there. This is Blaq Out. Would you like the films to be available with English subtitles for Download-To-Rent only or also for Download-To-Own?
As for the DVD release, we're discussing the rights with some UK and US distributors (but if you know some, don't hesitate to push them for the DVD to be released by them!).

Would love to see these films English subtitled. Personally, I prefer actual DVD's in dedicated cases. I would pay dearly for a box of these. Not sure if others would, but count me in.

If no DVD's, Download-To-Own for me.