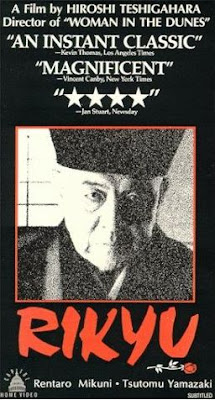 Hiroshi Teshigahara's 1989 film "Rikyu" (his first "narrative" film in 17 years) is a slow moving affair. It's very slow actually, but not at all in a dull way. It's slow in a methodical, studied, precise and pensive way. I can't guarantee you'll be riveted to the screen while watching, but you may find yourself lost in thought afterwards.

"This is the story of the duel between art and politics, of the beliefs of one man against the ambitions of another". This title card from the beginning of the film denotes the relationship between the powerful Hideyoshi and the quiet mentor Rikyu. Rikyu has been teaching Hideyoshi "the way of the tea" (via formal tea ceremonies) for 5 years during a period of the 16th century where art has flourished and Hideyoshi has helped unify many of the warring divisions of Japan. Rikyu is not only a master at these ceremonies, but posits them as a simple zen-like way of life. His flower arrangements and constructed tea-houses are in the same vein - the objects and their form have no specific relevance and should not be the focus. One of his students admits at one point that he was concentrating too hard on the tea-ware and forgot about the tea. As Rikyu says, "The richness is not in the humble tea-house, but in the spirits of those who sit there". 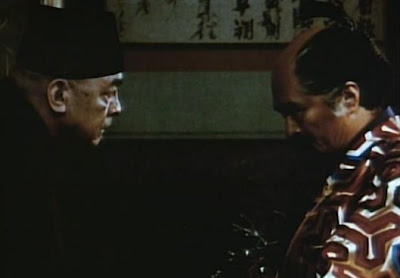 Though Hideyoshi respects his tutor Rikyu and certainly seeks his approval, he is also an ambitious man, not completely patient and still overly concerned about things and hierarchy. He complements Rikyu on his tea-houses, wonders why he cannot create art from his own flower arrangements and states that he much prefers the red tea bowls (he even throws a tantrum at one point when presented a black tea bowl by Rikyu's student Sofi - "Black is gloomy!"). This struggle between ways of thinking is really the story of the film and plays out in many ways. There is concern in the ranks of power regarding the fact that even shopkeepers were now learning how to perform tea ceremonies (they were originally created for samurai). Even women were studying it, but worse was that they were being taught by other women. Rikyu, of course, is not perturbed by any of this - he believes in the way of the tea for all. The relationship between the two men comes to a head when Hideyoshi hears that Rikyu believes that an attack on China would be difficult. Hideyoshi insists that it will be easier than his own rise to power and attempts to make Rikyu agree with him. In real life Hideyoshi, along with being a warrior, was a political strategist (encouraging foreign trade, revamping tax laws, etc.) who eventually tried to freeze the class system by preventing anyone from changing jobs. Rikyu's opinions seem to be the one angle of Hideyoshi's life he cannot control.

There are some beautifully composed shots and scenes in the film (as you might expect from Teshigahara). Though they are far less striking than his earlier films such as "Woman In The Dunes" and "Face Of Another", it makes sense given the tone of the film. Unfortunately, the quality of the current region 1 DVD leaves a great deal to be desired - the aspect ratio is a chopped 1:33 on the disc and the image quality is washed out and sometimes blurry. The lack of respect in the presentation of the film once again highlights the amazing job that companies like Criterion do for preserving the art of filmmaking.

In the end, Rikyu's quiet determination and unshakable beliefs pose a threat to Hideyoshi and his advisors. As Rikyu states though, "A narrow mind cannot open the door to tea".

Read more from Bob Turnbull at his blog.
Posted by Chris MaGee at 3:39 PM