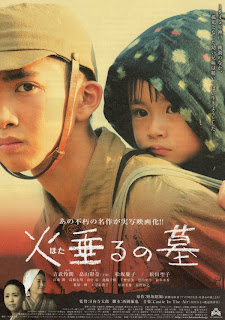 "Grave of the Fireflies" is not only one of the most moving and powerful animated films in existence today, its also one of the most devastating anti-war films. Its depiction of war torn Japan during the last days of WW2 are both honest and brutal. Adapting any kind of anime into a live action film always brings about a great set of challenges, and in a world where these adaptations are being increasingly popular; it was really only a matter of time before someone attempted it. In 2005, for the 60-year anniversary of the end of WW2, NTV produced a 2 and ½ hour television version. Three years later, Bandai produced a film version directed by relative newcomer Taro Hyugaji. Given the implications of adapting such a powerful film, is it possible to capture the same scope of destruction, and yet the same amount of intimacy that made the animated film so powerful?

"Tombstone of the Fireflies" aka "Grave of the Fireflies" follows Seita (Reo Yoshitake) and Setsuko (Rina Hatakeyama) as they struggle to survive. Their father, a Navy captain, is off doing battle at sea. Their home is firebombed during an air raid, and their mother killed. Unsure of what to do, they follow their mothers advice. In an emergency, visit their Aunt in a nearby village. She has a care package their mother sent, and should be able to take care of them. However, upon arrival, they are given a cold reception, and quickly turned away. Once their Aunt discovers they have a wagon full of candies and other treats, she quickly changes her mind and takes them under her wing. She soon becomes the archetypal evil stepmother, being kind and caring when she wants something from Seita, and then turning into a conniving and insidious witch. Soon Seita and Setsuko find themselves living in an abandoned bomb shelter, struggling to find enough to eat. 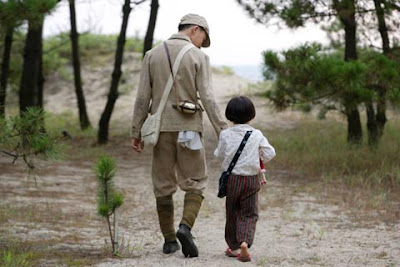 Its obvious from the get go that this incarnation of Akiyuki Nosaka semi-autobiographical novel was made with a meager budget. Why they thought they could get away with making this film I’m not sure, but someone, somewhere thought it was a great idea. Because of the lack of money, the child actors are newcomers, and we wind up with a mixed back of talent. Setsuko is really cute, but that kid cry convincingly for the life of her. Seita’s not too bad, but his depiction of an asthmatic is far from real. Speaking from experience, asthma attacks do not work like that. Because of this, and because of the script, the relationship between the two is pretty contrived and not nearly as effective as it should be. The emotional connection just doesn’t seem to be there. Elliptical editing is used quite often, however, its obvious its not a creative choice. Unlike other low budget films like "Now I…", which used ellipctical editing to emphasis the characters emotional state, its used here fairly often for budgetery reasons. There’s no depiction of firebombings or real devistation. Instead, we’re offered two new characters, a schoolteacher and a college student, who are suppose to help fill in the gap of how devastating war can be. The film struggles, even tries to hard at times, to let you know, hey, war is really bad. Where the animated film focused on the relationship between the two kids, which made the film far more devastating, this film tries hard to reach that emotional impact, but its so obvious its trying to do so, it doesn’t really work. But keep in mind; it’s not a bad film. Its well fairly well made, and the story is still emotionally resonant, but you can’t really separate it from the animated film, or at least for me, it’s really hard when it made such an impact. It does still have a few nice heart felt moments, but when it comes down to it, it will quickly be forgotten.

Read more by Matthew Hardstaff at his blog.
Posted by Chris MaGee at 11:10 PM