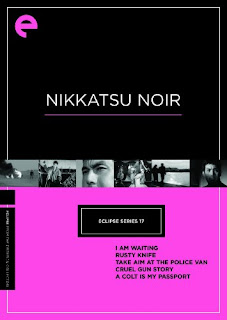 I should probably stop reviewing Seijun Suzuki films...I'm admittedly biased when it comes to the director as I really enjoy his style, overall sense of composition and his methods of telling a story with visuals. So there's little chance I won't be fully expecting to love anything by him when I approach it for the first time. This made me a bit concerned going into his 1960 film "Take Aim At The Police Van" (part of the newly released 5-film Eclipse Series 17 - Nikkatsu Noir), since it was an earlier effort by this future rebellious director and there was the potential for me to have set my expectations much too high. No worries though - within 2 minutes of starting the film, I knew I would love it...

The opening shot is a beautifully lit scene taken straight out of a Hollywood noir film: wet pavement reflecting street lights outside what appears to be a run down and abandoned warehouse. The next shot is of a man gently caressing the butt end of his rifle. As the headlights of a car glint off it, he loads the rifle and brings the sight up to his eyes (all while we never see him from the neck up). His viewfinder shows us a series of road signs as he pans past them: "Many Accidents", "Have Occurred", "In This Area", "Caution!". Cue titles and a view of the night time road from the driver's seat of the police van. It put a big smile on my face as it sets up the entire attack on the van without a single word of dialogue. Suzuki had 13 films under his belt by this time (in his first 4 years) and was looking for ways to not only keep himself interested in making these 'B' film crime stories, but to also engage his audience in different ways. 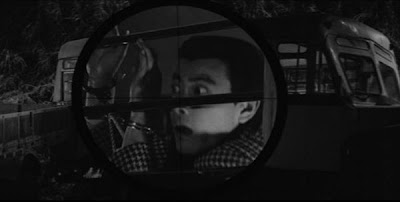 The plot is set in motion by the initial attack on the police van. The sniper ambushes them and kills several of the prisoners. Guard Daijiro Tamon is suspended because of the incident and decides to initiate his own investigation into why the ambush happened. He has a couple of measly clues to get him going - a solitary woman standing on the roadside, a name written on the window by one of the criminals - and he builds on top of them throughout the remainder of the film. A femme fatale, prostitutes, tanker trucks about to explode and a shootout and chase in a railyard all await our hero Tamon (played by 48 year-old Michitaro Mizushima) and it's all plays out in stunning black and white. Shafts of light splash and spill everywhere whether it's the middle of the day, dusk or in the dead of night. Each scene is carefully composed and frames our characters (good and bad) appropriately. I have to think that this particular film was included in the Nikkatsu set as a representative sample of Suzuki stretching past the point of being able to snap back. After a film like this with its obvious stylistic devices, how could he go back to shooting something generic?

The plot is purposely confusing and Suzuki has likely jumbled it a bit just to keep the viewer off a step and allow them the chance to play catch up. He's created an artful and sumptuous film to look at while always keeping in mind the goal of also entertaining his audience. I may be biased towards his films, but there's a good reason why that is.

Read more from Bob Turnbull at his blog.
Posted by Chris MaGee at 6:30 PM