Cinema Kabuki returns to the Scotiabank Theatre in Toronto 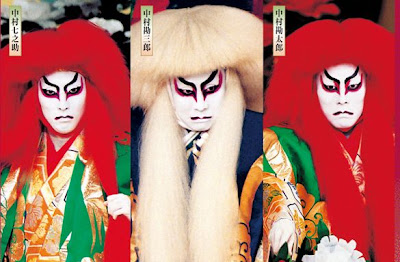 One of the cultural highlights of the year for me thus far has got to be the screenings of Shochiku's Cinema Kabuki project that took place here in Toronto at the end of March. Presented by the Japan Foundation and Marty Gross Film Productions the screenings brought traditional kabuki plays shot in high-performance HD and surround sound to Canadian audiences. This ongoing series of films is Shochiku's answer to such events as the Live from Lincoln Center opera films that bring the experience of a night out at the opera to movie going audiences who wouldn't normally get the opportunity to attend. These Cinema Kabuki films are that and more. Not only is the quality of the films astonishing in their detail, but they've allowed such well known directors as Yoji Yamada (Tora-san, The Hidden Blade) to share their love for traditional Japanese theatre with audiences around the world. Yamada's direction of the highly-esteemed Nakamura family of kabuki actors in his adaptation of San'yutei Encho's 1905 comedy "The Sentimental Plasterer" was a revelation to me. A layman like myself would never think that kabuki could be so vibrant and so hilarious! (Read my full review here.)

If you weren't lucky enough to catch Cinema Kabuki the first time it came to Toronto then you are in for a real treat. Once again the Japan Foundation and Marty Gross are bringing these wonderful films back to the Scotiabank Theatre from November 11th to November 15th, including "The Sentimental Plasterer" as well as "Dojoji - A Lover's Duet", "Nezumi, The Japanese Robin Hood" which screened in March plus two new films that are sure to wow audiences. First up there is "The Peony Lantern", a ghost story about two servants who are bribed to allow ghosts into their master's house. Then there's yet another Yoji Yamada directed play/ film "Triple Lion Dance" (which we reported on back in July) which features the relationship between a father lion and his two cubs.

For more details on this can't miss event check out the Japan Foundation website here.
Posted by Chris MaGee at 4:11 AM

Amazing post here. I love theater and just collect my Theater dance dress from at PIJ. I really love to read your post and now I look forward for your next update. Thanks.
http://bit.ly/X9c7YE