Yojiro Takita heads to Toronto for a special screening of "Departures" 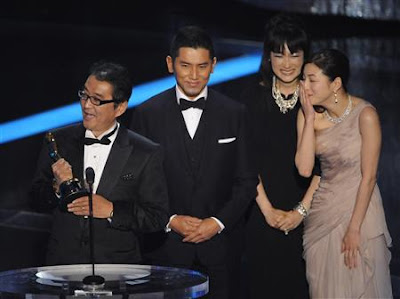 There's a lot going on in Toronto when it comes to Japanese and Asian cultural events this fall, but here's one event that is one of the most exciting. The Japanese Canadian Cultural Centre will be hosting a special screening of Yojiro Takita's Oscar-winning film "Departures" on October 26th at 7:00 p.m. I know, "Departures" already had a screening at the JCCC in August and a limited theatrical release throughout the summer, but this screening of "Departures" is going to be very special as director Yojiro Takita is going to be in attendance! Takita (above holding the Oscar with the film's stars Masahiro Motoki, Kimiko Yo, and Ryoko Hirosue) will be in Ontario for a screening of "Departures" taking place at Guelph's Grand River Film Festival that's running from October 22nd to October 25th and then he will be heading to Toronto specifically for this screening before heading home to Japan. Of course there will be a Q&A session as well as a post-screening reception with Takita.

You know that the Pow-Wow will be there, but we think you should be too. For more details on the JCCC's screening of "Departures" click here.
Posted by Chris MaGee at 4:10 AM