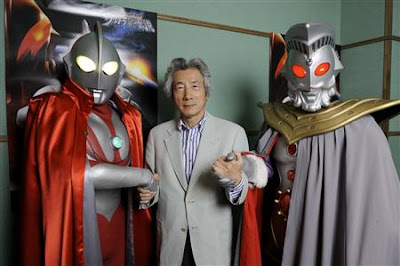 Japan saw a bit of political musical chairs in the years leading up to the historic shift from the Liberal Democratic Party to the Democratic Party of Japan last month. One prime minister after another popped in and out of office and of course it was the departure of Junichiro Koizumi in 2006 that set it all off. Regardless of his perceived effectiveness or ineffectiveness (depending on your political stripes) Koizumi definitely possessed a charisma comparable to the appeal of former U.S. President Bill Clinton or former Canadian Prime Minister Pierre Eliot Trudeau. Even though North America is steeped in celebrity culture we've yet had Clinton show up on a show like "The Simpsons" (or at least voiced by himself), and of course Trudeau passed away in 2000 so... but now there's news that Koizumi will be lending his voice to one of Japan's most popular franchises, namely Ultraman.

I can sense your bewilderment from here. Yes, you heard that right, former Japanese Prime Minister Junichiro Koizumi is lending his voice to an Ultraman film. Now, He won't be voicing the Ultraman, but he will be lending his voice to one o9f the senior members of the Ultraman pantheon. According to Tokyograph the 67-year-old fortmer head of state will be providing the voice talent for the char4acter of Ultraman King in the upcoming Ultraman film "Daikaiju Battle: Ultra Ginga Densetsu The Movie" opening in Japanese theatres on December 12th. His role is limited to a speech that Ultraman King is giving to an assembled group of Ultramen before a battle... but he was the former Primer Minister of Japan, people! No word on whether or not his speech will end with him belting out an Elvis Presley tune though.

Thanks to Sankei Sports for the above pic of Koizumi and his new castmates.
Posted by Chris MaGee at 4:25 PM

And here I was hoping his character was going to be some kind of Ultra Elvis.