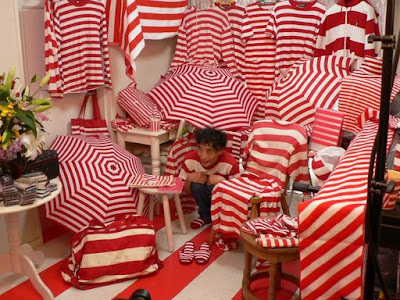 There's no doubt that Kazuo Umezu is a very interesting if very odd guy. The man who brought us such seminal horror manga as "The Drifting Classroom", "Cat-Eyed Boy", and "Orochi: Blood" isn't just out to scare the public. With his trademark red striped shirt, "hang loose" hand gesture, eccentric white and primary colour-painted mansion and downright goofy parties celebrating, well... himself, the 73-year-old manga artist could easily lay claim to the title of Japan's Michael Jackson, if only to reflect his playful, forever boyish persona. Like his manga contemporaries such as Shigeru Mizuki (GeGeGe no Kitaro) and Yoshihiro Tatsumi (A Drifting Life) Umezu's life and influence may be as interesting as his work, so it comes as no surprise that he is soon to be the subject of an upcoming documentary.

Koji Ito, the webmaster of Umezu's official website obviously has a close relationship with the man himself, and that relationship has become the genesis of "Gwashi! Umezu Kazuo Desu", "Gwashi!" being the exclamation from Umezu's manga "Makoto-chan". Ito turned to filmmaking, following Umezu with a camera for three years and now he's finally gone back and edited those hours and hours of footage into this feature length documentary. It doesn't seem like it's always a love letter either. His aforementioned eccentric mansion and the battle over its zoning with Umezu's neighbours apparently forms a centrepiece in the film.

"Gwashi! Umezu Kazuo Desu" is due out in Japanese theatres on November 23rd. Thanks to Tokyograph for this piece of news... and to give you just a taste of the wonderful weirdness of Kazuo Umezu check out the clip below from the Umezu Carnival 2009 that took place on September 23rd and featured the guest of honour on the mic.