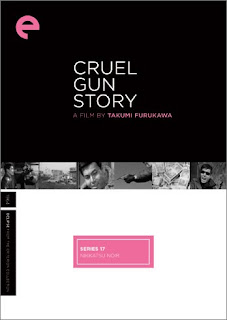 Though the English title for Takumi Furukawa's 1964 crime thriller (one of the five films in Eclipse's Nikkatsu Noir box set) is slightly awkward, it's pretty darn accurate. There's gunfire a plenty throughout the 91 minute run time and the victims don't always deserve it. Even those who are just tangentially involved in the goings on suffer consequences of the violence. If that sounds like a theme that could be applied to broader events from Japan's history, it's likely not a coincidence.

This particular story, though, revolves around Togawa (played by Jo Shishido), a cool customer if there ever was one. Sprung from jail 2 years earlier than expected, his expression is blank as he's offered a deal by a crooked business man named Ito. Along with a yakuza boss, Ito has paid a high price for extricating Togawa from his sentence (he had taken revenge on a truck driver who had accidentally crippled his younger sister) and now they want him to lead a planned armored car heist. The plan is supposedly foolproof, but they want to lower the risk even further and have sought out Togawa because of his reputation. At a take of 120 million yen, you'd think he would jump at the chance. That's not his style though. Even after Ito has laid out the plan, given him a stack of cash to spend for the preparations and the keys to a car, Togawa walks out casually saying "I still haven't accepted".

He's pretty much sold on the idea, though, when he finds out that old friend Shirai has also been recruited. He knows that he now has a trusted right hand man, so he decides to go ahead and meet the rest of the picked out crew. There's the punch drunk boxer, a greedy drug addicted gambler and a young inexperienced blabbermouth - not exactly your dream team. Togawa believes, however, he can get what he needs from them as long as he has their trust, so he positions himself as a tough yet fair leader and ensures them he would never sell them out. As Togawa lays the plan out for the team, we actually get to see it in action as if it were playing out in scripted fashion. By showing us the plan instead of telling us, the film not only provides a clear understanding of things in short order, but also foreshadows that this is likely not how it will play out for real. We can already see how full of holes the plan really is since we know the team isn't completely dependable and there are obvious points in the operation where things can easily be derailed. In a 7 minute time span, they must divert an armored truck to an alternate route, block that detour off to other traffic, kill the motorcycle escorts along with the guards inside the truck and then load the truck into a bigger truck so that it and the bodies can be disposed later.

So why does a smart guy like Togawa forge ahead with things? Though he almost turns down the job initially because of his responsibility to his still hospitalized sister, he feels that a big windfall could pay for another operation that could restore her ability to walk. He feels personally responsible for the accident, so a miracle cure seems to be the only thing for which he holds out hope. He's turned his back on friends, society and even religion (telling the doctor "to hell with God") and has essentially shut himself off. He also sees some of the desolation around him that has been left in the wake of the U.S. military presence. That's not all that was left behind - there's also the English signs, the Americans in the bars, the jets flying overhead and even a picture of Ricky Nelson in the bedroom of one of his men. It's hard to escape.

The film has a great deal in common with some of the film noir heist pictures of the two previous decades - in particular, Kubrick's "The Killing" feels like a strong influence. It's less dependent on shadows and light to create its mood, but there is still a definite air of desperation and doom to the proceedings. One may wonder how effective Togawa actually is (due to some questionable decisions he makes), but the film remains enjoyable due to its pace and spirit. There's no need for long exposition here - it's all action. The outcomes may not always be fair though.

Read more from Bob Turnbull at his blog.
Posted by Chris MaGee at 9:04 PM