REVIEW: Pastoral: To Die in the Country 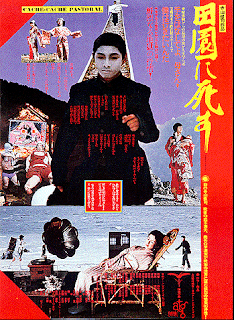 Our childhood forms us. The actions of our parents, peers, and our younger selves have repercussions that last, in some cases, until the day we die. It's the memories of our childhood, though, that can be elusive as our nightly dreams. The events that we remember gets morphed and magnified over time. Happy becomes happier, sad becomes tragic. Meanwhile the events that are fleeting and forgotten, buried in our unconscious can form the foundations of our adult selves. Most of us don't give these childhood inklings much thought, but artists, writers, and of course filmmakers mine their earliest memories for the creation of their work. To list books or films based on childhood memory would take hours, weeks, days; but of the myriad works that explore how an artists digs into their past I can think of none better than the master of the Japanese avant-garde, Shuji Terayama and his 1974 film "Pastoral: To Die in the Country".

Terayama was born in the winter of 1935 in the remote Shimokita Peninsula in Aomori Prefecture. His father died in the South Pacfic during the very last days of WW2 when Terayama was only ten and in the months following Japan's surrender his mother left him under the care of his aunt and uncle while she went to work on a U.S. Air Base. Although hardly 100% autobiography "Pastoral" does borrow liberally from Terayama's childhood. Case in point, the action in the film takes place on and around Mount Osore, the sulfuric, volcanic peak on Shimokita that locals refer to as "Mount Terror". It's here that the double for Terayama's young self grows up. This unnamed 15-year-old youth, played by Hiroyuki Takano, has got a lot to contend with. First off he's living in a fatherless household and watched over by a pathologically over-protective mother. Outside the home isn't much better. The village is a stronghold for traditional values and rural superstition, but we can tell right away that something is going wrong. The clocks in the village are chiming incessantly or not at all, and a group of black cowled women eavesdrop outside people's windows and march through what looks like blood at the foot of the mountain. All that our young protagonist can do is slowly and slyly mature, his boyhood desires centering around the married woman next door who "is just his type" and trips to Mount Terror to speak with the spirit of his late father channeled through a female medium. Then of course there is the circus camped out on the outskirts of the village, a taste of a larger, frightening and delicious world. 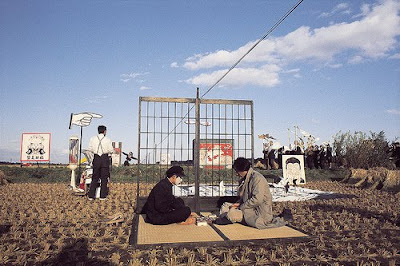 Although the basis of "Pastoral" sounds, if not basic, at least somewhat conventional... well, this review can't do justice to the phantasmagorical images that Terayama brings together to tell his story. Our young hero and his mother, as well as many of the villagers play their roles with white painted faces, characters appear and disappear at will mid-scene, images from old acupuncture texts appear repeatedly, but without explanation, free association and dream logic are utilized again and again instead of traditional narrative. And just as we are beginning to get a handle on this young man's story, surprise... we are introduced to his adult self, a filmmaker, not unlike Terayama, portrayed by Kantarô Suga. Yes, the film up to this point is a film within a film, and the filmmaker is on a mission, not just to come to terms with his young self, but to murder his own mother in an attempt to free himself from his past, but to achieve this goal he must depend on his white face-painted, 15-year-old self. Not your conventional narrative after all, and one that once you can get a grip in Terayama's dream world draws you further and further in with its strange beauty.

Terayama doesn't just spill his unconscious onto celluloid with "Pastoral: To Die in the Country" though. With the help of cinematographer Tatsuo Suzuki he captures his surreal visions with a clarity and kaleidoscopic palette that I've never seen used in any other film. Their use if multi-coloured filters, especially during the scenes at the circus give "Pastoral" the feeling of a post-Impressionist painting by Paul Gaugin, or the best acid trip you can imagine; but it's a crime that "Pastoral: To Die in the Country" isn't more widely seen and recognized here in North America. While the popularity of Chilean filmmaker Alejandro Jodorowsky and Terayama's fellow countryman Seijun Suzuki continues to grow on the repertory and midnight screening circuit nearly all of Terayama's filmography has been politely avoided on the infamy of his debut film, 1970's "Emperor Tomato Ketchup". That film, a grainy chronicle of a children's revolution against the adult world, has been heavily censored and outright banned in certain countries due to it's disturbing scenes of simulated child sex. I can't argue much with "Emperor's" detractors, but to have Terayama's later film work passed over due to the assumption that it might be a transgressive as that first film is ridiculous. Even though "Emperor" and "Pastoral" share the same surreal imagery watching the two is like seeing the work of two entirely different filmmakers. The former is almost laughably amateurish in its execution with most of the black-and-white footage being blurred and over-exposed, while the latter is alive with colour and texture, its vision of childhood not disturbing, but definitely confounding, like a wonderful puzzle.

Anyone who is drawn to the symbolic and surreal will be immediately rewarded by "Pastoral's" surface strangeness, but those who choose to delve deeper with be rewarded a hundred-fold by the film's questions about what we can learn from our childhood memories and how they have power over us to this very day.
Posted by Chris MaGee at 5:10 PM