Toshio Lee directs Hayato Ichihara in the ring in the upcoming film "Box!" 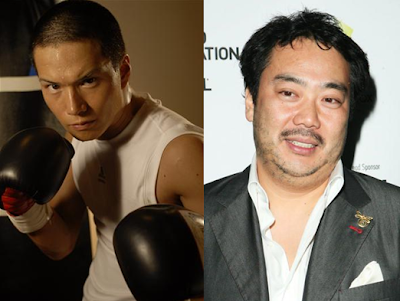 Most folks out there were introduced to director Toshio Lee (above right) after his film "Detroit Metal City" exploded around the globe last year. That film, which starred Ken'ichi Matsuyama in a hilarious dual role as a lovable geek who also just happened to front a death metal band, ended up winning praise from audiences and a handful of awards, including the Popularity Award at the 2009 Japanese Academy Awards and the People's Choice Award at this year's Nippon Connection Film Festival. Now Tokyograph is reporting on what project Lee is currently working on.

Lee is presently helming "Box!" for Toho and TBS. The film will star Hayato Ichihara (Worst by Chance, Rookies) as Gihei an under-achieving Osaka high school student (above left) who uses his fists to to get to the top in the boxing ring. Kengo Kora will portray his rival both in and outside the ring while Yu Kashii, Mitsuki Tanimura, and Toshio Kakei will round out the cast.

"Box!" is currently shooting, but Ichihara has been prepping for his role as a boxer by training with former Japanese welterweight champion Nobuyuki Tabata for three months now. "Box!" is set to hit theatres in May 2010. Thanks to Sankei Sports for the above image of Hayato Ichihara in character as Gihei.
Posted by Chris MaGee at 5:15 PM