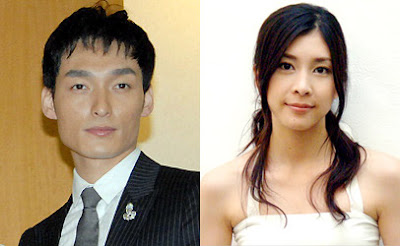 A romance about a critically ill woman whose life is extended by the humorous stories that her husband writes for her? Heartwarming? Saccharine? Of course, especially with SMAP member Tsuyoshi Kusanagi (above left) playing the husband and Yuko Takeuchi (above right) playing his ailing wife. The duo who starred opposite each other in Akihiko Shiota's 2002 romantic-fantasy "Yomigaeri" are back in front of the cameras together for "Boku to Tsuma no 1778 no Monogatari (1,778 stories of my wife and I)" which just began shooting at the end of October.

While the initial premise doesn't sound any more compelling that any syrupy romance that gets released in Japan every year it is interesting to know that this story (or 1,778 stories) have a basis in reality. The film is an adaptation of Japanese science fiction author Taku Mayumura's memoir of his regimen of laughter that helped to extend his wife Setsuko's life while she battled colon cancer. What makes "Boku to Tsuma no 1778 no Monogatari" that much more interesting is who's directing.

You may remember director Mamoru Hoshi from the 2004 Koki Mitani scripted film "University of Laughs" that pitted Gorô Inagaki's vaudeville playwright against Koji Yakusho's humourless censor. That film is a classic that sadly hasn't gotten the recognition it deserves, so to see that Hoshi is tackling the power of laughter again is definitely intriguing. Will this measure up to "University of Laughs"? Probably not, but it does hold a bit more promise than than most Japanese 2-Kleenex box weepers.

Check out the clip below from Japanese TV of Kusanagi and Takeuchi shooting scenes from " "Boku to Tsuma no 1778 no Monogatari " that's due out in Japanese theatres in May. Thanks to Nippon Cinema for the details on this.