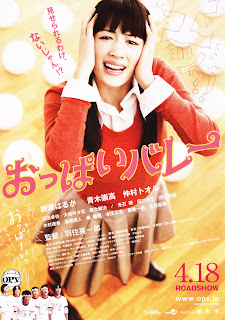 Not every film can be an auteur-driven masterpiece of artistic expression. Most are made with the much baser goals of profit and popularity, and there's nothing wrong with that: There are films, and then there are movies. The Japanese film industry produces both, and is adept at lightweight comedies, especially lightweight high-school comedies. So when a movie like "Oppai Volleyball" comes along you adjust your expectations accordingly and hope for the best.

The premise is novel enough: It's the 1970s, and 23-yr-old Mikako (Haruka Ayase), the new teacher at the local high school, is handed the worst club to coach: the boys' volleyball team. They never win or even play, happily forfeiting their games for too few players. The club is just an excuse for them to hang out and discuss—and occasionally ogle—girls. Through a bit of verbal trickery and guilt, the boys get their attractive new coach to promise to show them her oppai (breasts) if they win a game. Dorky and unpopular with girls their own age, the team instantly begins practicing as if their lives depended on winning. Mikako is caught between pride in their sudden dedication and hard work, and fear that they may succeed. After all, she's a woman of her word, and openly ponders if she'll be forced to flash her pupils.

If this sounds like a fun (and distinctly Japanese) variation on the "Waterboys"-style plot, you're only half right. Yes, there is a group of social nobodies who choose a less-then-popular sport and learn life lessons as they practice and play it, but there's never that infectious sense of joy that sweeps the viewer into the story in better examples of the genre ("Swing Girls", "Koi Wa Go-Shichi-Go"). Unfortunately "Oppai Volleyball" is closer in tone to "Dead Poets Society", but without Peter Weir's facility for conveying emotion. The result is sincere and means well, but it feels as routine as a TV movie. 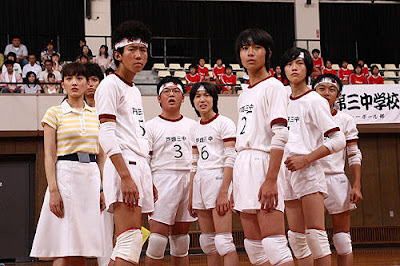 "Oppai Volleyball" is clearly a star vehicle for Ayase, the latest in a series of high-profile roles ("Cyborg She", "Ichi", "Happy Flight"). She does her best and is convincing as a teacher in over her head, but the film around her doesn't quite maximize its opportunities for humor or drama or pathos. Known for his "Umizaru" ("Sea Monkey") films, director Eiichiro Hasumi seems intent on showing Ayase in as flattering a light as possible, but even this backfires. In "Ichi" and even "Happy Flight" she looked like a regular person, the pretty girl next door. In "Oppai Volleyball" she's practically radiant, and not to any narrative advantage. For the purposes of this story, a plain-looking actress may have been a better choice in order to cast the boys' oppai lust in an even more comic light. For that matter, I wonder how much more effective the movie would have been had director Hasumi focused more on those boys and their coming of age story, and offered us one fewer 30-second take of Haruka-chan staring off into space looking concerned.

No other cast members really stand out since no other cast members are given anything to do but offer occasional support or disdain for Mikako. The training sequence that's supposed to showcase the boys' characters feels awkward, as if it was dropped in from a different script. The movie does earn points for not manufacturing a villain, but rather letting the story unfold in a more or less naturalistic manner. There's the standard lapse into sickly-sweet sentimentality in the third act, but it's tempered somewhat with humor and besides, these films practically require that sort of thing. Thinking back over the spate of post-"Waterboys" films of this sort, only "Swing Girls" avoided that trap and as fun as that movie is, it has the weakest ending of any of the zeroes-to-heroes high school comedies.

"Oppai Volleyball" exists in limbo between the raunchy teen comedy of "American Pie" and the feel-good nostalgia of "Always". It doesn't commit to either style, making it uneven but harmless–fun, but not memorable. I didn't expect raunchiness in the "Superbad" vein, but I did have a quiet hope that the film would have the conviction of its premise and not shy away from the universal (and universally funny) hormone-driven lust common to teen boys regardless of nationality. The closest "Oppai Volleyball" gets to that is to have the boys chant "Oppai, oppai" as they jog and train, which while cute isn't quite the same thing. Despite a solid performance from Ayase and some excellent '70s-era art direction, "Oppai Volleyball" is never a film, just a movie.
Posted by Chris MaGee at 5:22 PM