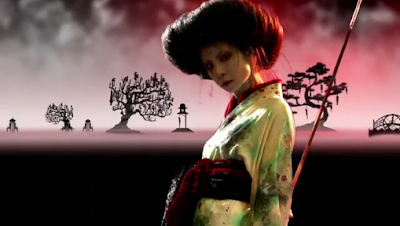 In April and May of this year buzz began to slowly grow online about a short martial arts film titled "Yassy" (read our coverage here). It's director, Shinichi Fujita, wrote the screenplay for Yûji Shimomura's 2005 so-bad-it's-good action movie "Death Trance", and for "Yassy" Shimomura helped his writer out by stepping in to direct the action sequences. It was that creative quid pro quo that probably got the hype ball rolling, but up until now only teaers and a trailer had seen the light of day. Not anymore. Fujita has posted "Yassy" in its entirety on his YouTube channel in two parts and Kevin Ouellette has got both of those parts over at Nippon Cinema.

"Yassy" star as actress Hiroko Yashiki who previously starred in "The Machine Girl" and "Shinobi: Heart Under Blade" in small supporting roles. Here she's front and center, although, as we'd all expected, there isn't much plot to report on. From the first lines of, "In a world where dreams and reality are evident through your blood one woman fighting her way throgh two worlds and accepting her ultimate fate," followed by "coming soon" spelled with two M's you know that you'll be watching a very flawed little gem. If you can get past the cheesy "In a world" intro and put up with the ultra-annoying performance of actor Chuck Johnson "Yassy has some pretty tight action sequences courtesy of Shimomura... Although my favorite move by Hiroko Yashiki in the whole film is her managing to walk down a flight of stairs in platform heel boots. Martial arts - shmartial arts, that takes some serious skill!

For all the action, blood letting, and suspect acting head over to Nippon Cinema here.
Posted by Chris MaGee at 5:20 PM