REVIEW: Tales of the Street Corner 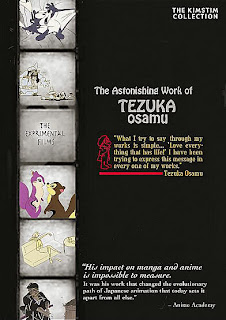 I sometimes worry over the term "experimental". As many of you will know I've got a very soft spot in my heart for experimental film, but when the folks at The KimStim Collection recently released "The Astonishing Work of Osamu Tezuka", a collection of the "experimental" films of the manga and anime "god", I questioned the chosen title. The more I mull it over "experimental" has connotations of a scientist holed away in a laboratory trying to reproduce some accidental discovery over and over again in order to prove it's veracity of validity. When you look at the great experimental films of, say, Stan Brakhage for example you don't think of him trying to reproduce the same results with his work over and over again to prove anything. I think more of exploration, or dare I say it play when I see Brakhage's work, or the work of any filmmaker working outside narrative and technical traditions. A lot more people would have a problem with the term "play films" because it would be interpreted as somehow demeaning the final result, that the filmmaker wasn't acting seriously when he or she was working. I could argue the exact opposite, that our innate ability and desire to play (imagine, go off on tangents, follow whims) from the time we are children up to the daydreaming of adulthood is the very root of creativity whether it be film, painting, writing or dance. Still, I suppose we're stuck with "experimental films" as the universally accepted term, but when I sat down to watch Osamu Tezuka's 1962 film "Tales of the Street Corner" I couldn't help looking at the film as a gloriously inspired and breathtakingly executed play session.

Released by Tezuka in 1962 "Tales of the Street Corner" features no dialogue, only one human character, and doesn't fit into the prescribed format of a 5-minute cartoon. Take all that at once and I guess I can understand why it would be lumped into the category of an experimental film, but it's an uncomfortable label for me. No, "Tales of the Street Corner" doesn't feature one cohesive narrative... it in fact features six - a little girl who loses her teddy bear out of her bedroom window, a rambunctious baby mouse who finds said bear laying in the eaves trough of the girl's apartment and befriends it, a tree that is trying its best to send seedlings down to fertile soil, a mischievous moth who is, like most moths, fascinated by the light of a streetlamp, a faceless jack booted character who plasters up posters of a moustachioed dictator, and finally the lively community of posters that already inhabit this forgotten street corner, one that includes a poster of a male violinist and another a female pianist who fall into their own little two-dimensional romance. That's a lot of story for an "experimental film", a genre that is supposed to go beyond such pedestrian ideas as story and character. Maybe "non-commercial" would better suit "Tales of the Street Corner". I mean, it certainly does seem like Tezuka was indulging his own creative whims when putting this film together.

Like his later, and much better known, film "Pictures at an Exhibition" (also included on the KimStim DVD) Tezuka uses the structure of separate posters to explore every kind of elaborate and whimsical visual device. As the soundtrack for "Tales of the Street Corner" plays the entire wall of posters dance - clapping jack-the-boxes, singing dentures in a glass, a caveman wearing shoes on his feet, a woman walking her pet Martian on a leash, plus nods to such great artists as Toulouse Lautrec, Vincent Van Gogh, and Tōshūsai Sharaku. It's like Tezuka's imagination is spilling out through the visual device of these posters. That's why "play" comes to mind again and again as I watch "Tales of the Street Corner". Unfettered by making a commercial film he can have fun and use ideas like these without having to justify them with any specific narrative.

That's not to say that "Tales of the Street Corner" is all wonderful flash and no substance. Those jack boots and the posters of the dictator, his chest heavy with medals, segue into a frightful conclusion where Tezuka shatters the peace of this little corner of the city with a fierce bombing campaign. Maybe a standard cartoon couldn't encompass this kind of social commentary? A 39-minute cartoon about a city slipping into fascism and war? Maybe "Tales of the Street Corner" could be categorized as "cautionary tale" instead?

There's a lot of different labels that could be placed on this film, but what I found so impressive about "Tales of the Street Corner" is just how different is looked from the manga and anime work that Tezuka was doing at that time. Tezuka was the man who virtually invented the look of modern manga characters, with their windswept hair and huge watery doe eyes, a look that he and the staff of his production company Mushi Pro would carry over into anime with the premiere of the first "Astro Boy" animated series in 1963. Produced just a year prior to that "Tales of the Street Corner" doesn't mirror this aspect of Tezuka's work at all, in fact it looks like the work of an entirely different artist. It reminded me of how at the time of his painting of the "Mona Lisa" Leonardo da Vinci was at the same time studying birds to perfect his many theoretical flying machines. In other words, a genius can't be tied down to one task, one style, one function, They take play to a whole new level. They turn it into "art".

"Art" - I think that is a definition that we can all agree on when it comes to the great Osamu Tezuka. Maybe we can dispense with such terms as "experimental", "play", "Non-commercial", and "cautionary tale" and cherish Tezuka's walk down a street corner for what it is, a remarkable work of art that can transcend culture and language and fascinate viewers, like me and like you, no matter where in the world they may be.
Posted by Chris MaGee at 5:16 PM