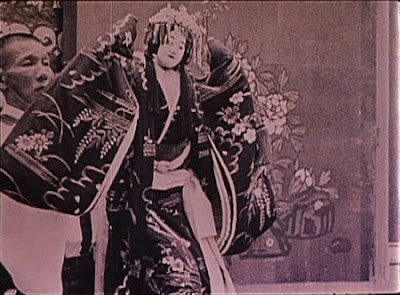 The early years of motion pictures in Japan is an area of particular interest to me, so when I saw this story posted over at Mainichi Daily News I was pretty excited. Waseda University will be screening "Marionnettes Japonaises", a 42-minute silent film, at its Tsubouchi Memorial Theatre Museum on December 22nd.

The French title gives an indication of a bit of this film's history. Shot at Shochiku Studios in the summer of 1921 the film is the oldest surviving film of a traditional bunraku puppet play. Scholars believed it received a release later on in the summer of that year and then was exported to France where it received its title. The film is finally making its return to Japan thanks to Paris' Albert-Kahn Museum.

Besides the fact that "Marionnettes Japonaises" is the oldest surviving film that captured bunraku it is also the oldest surviving film produced by Shochiku Studios. Although founded in 1895 Shochiku produced Kabuki and Noh plays for the first 25 years of its existence. It wasn't until 1920, a year before "Marionnettes Japonaises" was shot, that the company moved into film production.
Posted by Chris MaGee at 5:15 PM