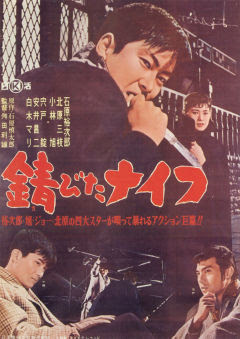 This first collaboration between director Toshio Masuda and star Yujiro Ishihara was a financial success for Nikkatsu Studios back in 1958, so they decided to make a habit of it. Across 25 films, these two men helped define the action film for Japanese audiences into and throughout the 60s. Probably the least "Noir" looking of the films in the Eclipse Nikkatsu Noir box set, "Rusty Knife" doesn't have as many of the obvious tropes of the U.S. Noir films. However, it cuts through to the core of that genre - the difficulty of shedding your past and the likelihood that it will re-emerge.

The story is based in Udaka City - an industrial town springing up during the post-war economic boom with former military factories now being used for peace time projects. One side effect, which all other growing cities around this time had, was an increase in crime based around the local gangs that were rooting themselves into the communities. The gangs are ruthless and have already established a sense of fear that's so strong, the police have become powerless since no one wants to be a witness against the criminals. The public, however, see the police as bumbling cowards and have little to no trust in the system to bring anyone to justice. This suits gang leader Katsumata just fine. At the outset of the film, the police are coming to bring him in for questioning regarding an assault and his men joke that he's lucky since he'll be able to catch up on some sleep.

The news of Katsumata's arrest inspires a former yakuza gang member by the name of Shimabara (played by a young Joe Shishido) to send anonymous letters to the police accusing the gang leader of a murder years ago. It appears that the suicide of a politician was in fact murder and that Shimabara and two others witnessed the crime and were payed hush money by Katsumata. While the police are grappling with this news, Shimabara blackmails Katsumata to get additional money for him and his girlfriend. Do I need to mention that things don't end well for Shimabara? What this does accomplish, though, is to resurface the past and involve the other two witnesses: a bar owner name Tachibana (Ishihara) who spent 5 years in jail for stabbing a man he suspected of raping his old girlfriend and Terada (Akira Kobayashi), a bartender in Tachibana's bar "Camarade" and not someone who likes to think things through. While Terada willingly takes additional hush money from Katsumata, Tachibana refuses it. He's tried to move back into normal society and wants to forget about his past. He worries that the temper that got him into trouble the first time may re-ignite. Complicating his emotions is that his friend's fiancee Keiko (played by Mie Kitahara who shared the screen with Ishihara in several films) was the daughter of the politician they witnessed get murdered. She's currently making a documentary about violence in the city and it's bringing everything back to Tachibana.

It's a fine story with several twists and turns - some expected and some not - though it is somewhat hampered on occasion by some clunky exposition and dialogue. Fortunately, things just keep moving and before you know it Tachibana is involved in some sort of confrontation - a high speed truck chase, a long drawn out punch-out or a duel between knife and sword. Ishihara is pretty terrific bouncing between resigned and intense. He's awkwardly handsome with a crooked smile framing his even more crooked teeth and occasionally looking too thin for his suit with hair that weighs him down. He can spring into action at the drop of a hat (there's that temper) and you believe he really was that ruthless killer he's trying to leave in his past. As the story begins to consider the issue of working through the painful legal system or taking matters into one's own hands, Tachibana says "I need to face up to this knife". That rusty knife is still with him - it's getting old, but it's still there.

Read more from Bob Turnbull at his blog.
Posted by Chris MaGee at 5:12 PM