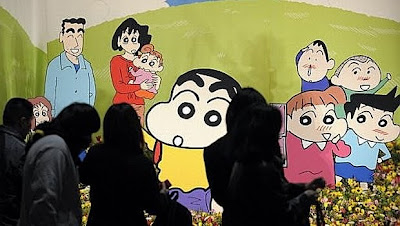 In September Japan lost one of the biggest names in manga and anime. On September 11th Yoshito Usui, the creator of "Crayon Shin-chan" was reported missing by his family after he didn't return from a hike in the mountains of Gunma Prefecture. (Read our original report here.) Usui's family prayed for the best as authorities spent over a week sweeping the area where the manga/ anime artist had last been seen, but on September 19th the sad news came that Usui's body had been found. Most likely he had slipped while hiking and fallen to his death.

On November 30th a public memorial was held for Usui and as a testament to thge popularity of his creation "Crayon Shin-chan" over 3,000 people came out to pay their respects. among those 3,000 was Tetsuya Chiba, the creator of "Ashita no Joe" and longtime friend of Usui's. "Mr Usui unfortunately died," Chiba told the press, "but the characters created by Mr Usui are still alive." With the adventures of Shinnosuke Nohara, a.k.a. Shin-chan selling over 50 million copies since their debut in 1990, and their subsequent translation into 14 different languages Chiba is absolutely right, in fact the 17th "Crayon Shin-chan" animated film is due out in Japan this coming spring.

Thanks you for Shin-chan, Usui-san and rest in peace; and thanks to Japanator for the details on this story.
Posted by Chris MaGee at 5:09 PM