REVIEW: A Tree of Palme 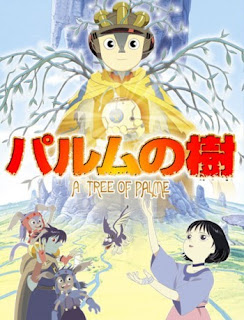 Most people are at least somewhat familiar with the classic tale of Pinocchio by Carlo Collodi, largely thanks to the 1940 Disney animated film. The adventures of the little wooden puppet have been told and retold countless times, spawning several onscreen adaptations. However, there may not be one quite like “A Tree of Palme,” which takes the familiar story into strange and fascinating new directions.

In Takashi Nakamura’s anime film, the Geppetto figure is a whiskered botanist who lives on a desolate plain in the shadow of a giant kooloop tree, which possesses mystical properties. From the wood of this tree, he carved Palme, a robot rendered in the form of a boy. Since the death of Xian, the old man’s wife and Palme’s mother figure, Palme only rarely comes to life, literally deprived of purpose. That changes when a mysterious and formidable female warrior named Koram is pursued by a party of masked hunters. She entrusts Palme with the Egg of Touto, a capsule which he must deliver to the underground kingdom of Tamas . As Palme carries out his quest while under the assumption that its completion will make him human, he is joined by a pair of street-wise urchins; Shatta, the blue-skinned son of Koram; Popo, a little girl who yearns to escape from her vain, cruel mother and a squawking bird-like lizard creature. 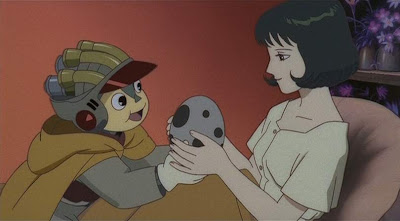 Certain recognizable elements of “Pinocchio” can be spotted throughout “A Tree of Palme,” but they are scattered across a bizarre, fascinatingly designed science fiction realm. One of the film’s first scenes shows Palme frantically climbing the warped, towering kooloop tree to get closer to a massive green fish swimming through the sky surrounded by flocks of stork-like birds. While on their journey, the travelers cross flat red deserts and great orange rivers, encountering giant, airborne jellyfish; towering flowers; floating blue and white orbs referred to as “floating grass” and giant purple lily-pads that reach to the sky. This world seems to be overrun with growing things: tentacles, creepers, vines, plus the upright, phallic pods that travel in herds and swarm their prey. There are other areas like the bustling city where Palme meets his new friends and underground, Moria-like caverns, but the most imaginative parts of the film stem from its savage, untamed, truly alien ecosystem.

One of the things that surprised me about “A Tree of Palme” was the rather dark sensibility that it occasionally veers into. Palme’s home at the start of the film is covered with splashes of blue paint that are revealed to be everlasting signs of Xian’s mental destabilization. Later, the little shack becomes a site of tragedy when the old man is fatally stabbed by Koram’s hunters. Most chilling is the gradual transformation that Palme undergoes as he pulls himself closer to becoming human. For him, it is not just a simple yearning, but instead a consuming obsession that often makes him needy and short-tempered and wreaks havoc on his behavior, emotions and psychology. In one scene, he kills an innocent deer-like creature, simply as part of his learning process regarding life and death. In another, he expresses distrust and even animosity towards his companions, rejecting them outright. All of it is part of his difficult struggle to understand what it means to be human, giving the film a complexity that I, for one, was glad to see applied to the usually softened, kid-friendly Pinocchio story.

Thanks to a dazzling selection of images and a stirring score by Takashi Harada, “A Tree of Palme” succeeds as a marvelously original adventure. Additionally, it proves to me once more just how ideally suited the animated medium is to bringing to life grand-scaled epics of fantasy and science fiction – and that it doesn’t always need to be Hayao Miyazaki who uses it to pull off feats of storytelling wonder.

Read more by Marc Saint-Cyr at his blog.
Posted by Chris MaGee at 5:07 PM