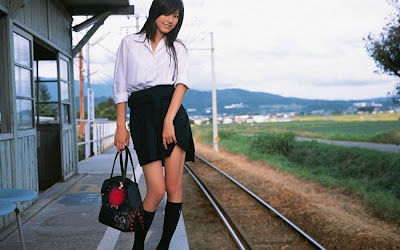 If boring old farts like me thought that gore films are (or were) the next passing phase in Japanese popular film after J-Horror we'd be wrong, at least as long as the Father, Son and Holy Ghost of the genre - director Noboru Iguchi, director and special effects wizard Yoshihiro Nishimura, and stunt choreographer, actor, and director Tak Sakaguchi - are around to give us boring old farts the what for.

It was announced over at Twitch this week (thanks to a heads up from Mr. Don Brown that this trio of friends and colleagues are joining forces yet again, this time to direct a segment each in an upcoming omnibus film titled "Sento Shojo". Production on the film which will star gravure idol Yumi Sugimoto (in the above promo still) will carry her through three separate segments of the same story, and we can only assume that by the end of it someone might have a paper cut or two... or three... or might be disemboweled.

Outcast Cinema's Marc Walkow is saying that "Sento Shojo" will be starting production next week and that it will end up being backed and distributed by Nikkatsu's new genre/ gore wing Sushi Typhoon. And if you think that "Sento Shojo" doesn't have the same punch as, say, "Tokyo Gore Police" then don't worry. The English title for the film is slated as being "The Mutant Girls Squad". I think that's a bit harsh, don't you? Sugimoto-san doesn't even look a little bit mutated.
Posted by Chris MaGee at 6:20 PM