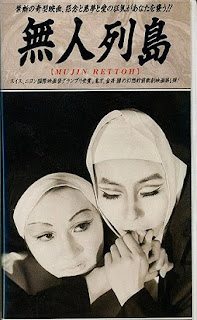 The Japanese New Wave, that revolutionary cinematic movement that in actual fact was never an organized movement at all, certainly added its share of masters into the pantheon of Japanese cinema - Nagisa Oshima, Shohei Imamura, Kaneto Shindo, Masahiro Shinoda, and Yoshishige Yoshida to name only a few. It also encompassed a number of equally powerful although less celebrated (at least here in the West) filmmakers like Susumu Hani, Masao Adachi, Kazuo Kuroki, Toshio Matsumoto and the infamous and visionary Shuji Terayama. While these filmmakers for the most part worked entirely independently they did share a spirit of exploration, protest, innovation, and iconoclism. In the turbulent Japan of the 60's and early 70's this feeling seemed to be in the water and it informed the work of numerous filmmakers, some marginal to the New Wave and some sadly forgotten. With New York's Japan Society putting on their retrospective of New Wave classics "Shinjuku Ecstasy" last year it seems that the time was ripe to reacquaint ourselves with the films from this "movement", but in a happy coincidence 2009 also saw one of these nearly forgotten filmmakers pulling himself from obscurity by releasing a 5-disc DVD set of films. That filmmaker is Kanai Katsu, and the film that kicks off the set, as well as the film that kicked of Katsu's independent filmmaking is 1969's "The Deserted Archipelago".

The first film in a loose trilogy that would continue with 1971's "Good-Bye" and 1971's "The Kingdom", "The Deserted Archipelago" is a surreal political tale, a film entirely of it's time. By the late 60's and early 70's the leftist student movements who had mobilized against the U.S.-Japan Security treat, better known as the Anpo Treaty, had splintered and re-splintered into ever smaller and more radical groups. By the time that Katsu was making "The Deserted Archipelago" many university campuses in Japan more closely resembled battlegrounds than they did places of learning. While these groups clashed over the finer points of political actions many shared the common goal of throwing off the yoke of U.S. Imperialism in their home country. It's this core idealogy that Kanai explores in his film. 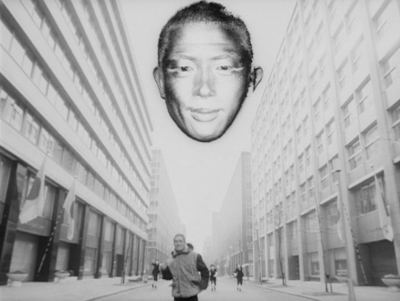 In a world where the seasons have gone topsy turvy a young wounded man named "Land of the Rising Sun" Hidekuni is being led back to the Christian nunnery where he's been raised. There he is put on trial by the nuns for what we discover was his third escape attempt. His sentence is a severe whipping, but but torture that ends in a sexual coupling (sexual intercourse can't adequately describe what occurs) with the nun wielding the whip. Through this Hidekuni becomes pregnant and gives birth to a child from a tumor in his back. Escaped once again he is pursued by one of the nuns while the boy, growing like a siamese twin from his spine grows to adulthood. "Why do you always look to the Western sky?" this son/ twin asks Hidekuni. "I look West because I can't look East," Hidekuni replies. It's only through murdering this son/ twin that Hidekuni is truly set free to travel West and, as he puts it, "reignite the sun". This resurrection of the classic symbol of Japan is fraught with dangers and dream-like encounters. Kanai has Hidekuni encounter a Korean-Japanese couple, professional wallpaperers, their offspring, a comedic quintet of men connected by an umbilical cord, rampaging salarymen, and shirtless soldiers who attempt to stop Hidekuni from storming the Japanese parliament.

While the political symbolism that Kanai uses in "The Deserted Archipelago" is fairly obvious in spots, with Western religion, Western music including Hank William's "Elijah" and James Brown's "Papa's Got a Brand New Bag", and the assertion by the nuns that "A bit of sacrifice is necessary for peace" pointing the finger directly at U.S. influence in Japan, it would be a mistake to reduce everything that transpires in the film to a "this equals that" formula. It's obvious that Kanai possesses a truly fluid and inventive imagination, one capable of producing intuitive and poetic imagery that hints on multiple subtle meanings. His inclusion of 14th-century Dutch master Hieronymus Bosch's painting "The Garden of Delights" at points during the film is a key to the dangers of symbolic interpretation and the power of surreal imagery. Art historians have attempted with varying degrees of success to interpret Bosch's fantastic and grotesque imagery as being everything from a satire of Dutch church of the time, to coded heretical teaching of groups like the Cathars and Knights Templars, to mnemonic images designed to teach standard morals. Any or all of these interpretations may (or may not) be correct, but it's doubtful that Bosch's paintings have retained their hold on our imaginations by simply being pat symbols of the political and social life of his time. The exact same goes for Kanai's "The Deserted Archipelago".

As mentioned at the beginning of this review, with retrospectives of the work of Kanai's New Wave contemporaries popping up across North America last year one can only hope that film fans will dig a bit deeper to rediscover not only "The Deserted Archipelago", but all the films contained in his 5-disc set, either for a look into Japan of circa the late 60's or as a landmark of surreal filmmaking.
Posted by Chris MaGee at 6:16 PM