Love 70's era Pinky Violence? Then here's something for you - "Sukeban Hunters" 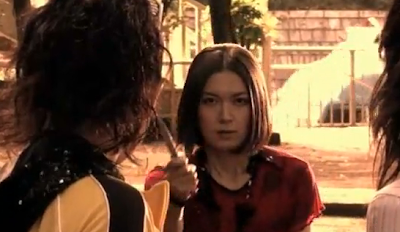 Here is some good news for lovers of good old-fashioned Toei-style Pinky Violence. Marc Walkow has pointed the way (via Todd Brown at Twitch) to a new film that takes its inspiration directly from those naughty, kitschy actioners. Titled "Sukeban Hunters: Soukatsu Nagurikomi Sakusen" and directed by Kazufumi Nakahira it's got more than enough machine gun fire and teenie weenie bikinis to please the "Machine Girl" and "Toyo Gore Police" crowd while staying true to great old films like Norifumi Suzuki's "Girl Boss" films and the "Female Convict Scorpion" series that had their won fair share of gratuitous sex and violence.

No specific plot details but it does look like "Sukeban Hunters" has got an interesting cast - Asami, star of Noboru Iguchi's "Sukeban Boy" and "Machine Girl", Sakichi Sato, screenwriter of "Gozu" and director of "Tokyo Zombie" and martial artist Chuck Johnson, who's appeared in films like "Death Trance" and the action short "Yassy".

Check out the five minute preview of the film (thanks to Nippon Cinema for tracking it down) which will be hitting selected Japanese theatres this summer... and if the reports are correct may be getting a sequel very shortly thereafter.

This is the feature-length version of the 15-minute "Yakuza Hunter" short (also starring Asami) from the 4-DVD collection "893239". Asami has been blogging a bit about the production, which (typical for a low-budget Japanese film) only lasted a couple of weeks.
http://spopro.net/blog/asami/
This accelerated schedule is nothing new to her: Her first non-AV starring role was in Noboru Iguchi's deranged "Sukeban Boy", which was filmed in 3 days!