Shunji Iwai directs music video for AKB48? Oh, how the mighty have fallen... 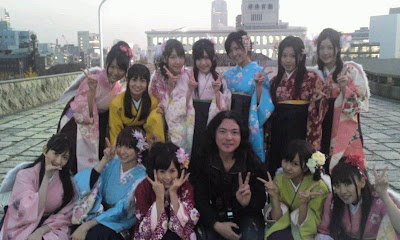 Okay, we all know that Shunji Iwai got his start directing music videos, and even though his feature film output has at times been erratic in terms of quality he's given us one of the best films that has come out of Japan in the last ten years, 2001's "All About Lily Chou-Chou". That film alone has secured his spot in Japanese film history. Still, since 2004's "Hana and Alice" Iwai's output has been downright infrequent. He's hinted that this has been due to the fact that his longtime cinematographer, Noboru Shinoda, passed away in 2004. here have also been rumours that Iwai may be giving up feature filmmaking altogether, but this latest bit of news on the Iwai front takes us from erratic feature film quality, through infrequent output, and right down to "How far have the mighty fallen?" territory.

Yahoo Japan is reporting that the 47-year-old filmmaker has directed the music video for girl group AKB48's new single "Sakura no Shiori". Actually to call AKB48, whose name name is an abbreviation of "Akihabara 48", a girl group is a gross understatement. The group is literally made up of 48 young girls who are split up into "Teams" and have their own theatre in the otaku capitol of Tokyo, Akihabara. Visitors to the AKB48's theatre can see their idols perform regularly in glitzy stage shows. Think of a much more chaste version of The Pussycat Dolls with a hell of a lot more members and you might get the idea.

"Sakura no Shiori" is being released at this very moment in Japan, February 17th, but Iwai's video hasn't hit YouTube yet. the video sharing site has a preview commercial which you can check out below, but the folks at Daily Motion have got the full video for the syrupy choral ballad here. In terms of visuals it's pretty enough, with the members of AKB48 strolling through city streets in kimono and angels wings, but it still boggles the mind that Iwai has pretty much abandoned his feature film career to go back to directing video for pre-packaged groups like this... The heart sinks a little.

Thanks to AKB48's blog for the above image of Iwai flashing the peace sign with the girls.

Thanks for sharing the links and great post on Shunji Iwai directs music video for AKB48? Oh, how the mighty have fallen, Very Interesting.