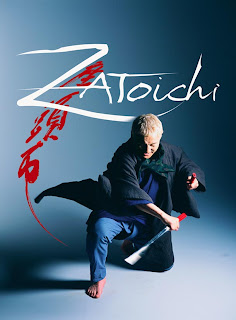 Takeshi Kitano's "Zatoichi" had every chance of being a disaster. His usual deadpan, idiosyncratic style would be hard to meld into a retelling of one of the most beloved characters in Japanese cinematic history. The first posters with his bleach blonde hair did not bode will with me. I'll admit, I'm a Zatoichi fan first, and a Takeshi Kitano fan second. Nothing against Kitano, but I'm a sucker for a good old-fashioned chanbara film. Legend tells that Chieko Saitô, a former stripper and close friend of the original Zatoichi, Shintaro Katsu, approached Kitano. She wanted someone to pay tribute to Shintaro, and badgered Kitano until he said yes. But how to balance his own needs as an artist and those of the "Zatoichi" mythology? He couldn’t exactly deconstruct the genre like he usually did. That would be career suicide, even for a man of his cinematic stature.

Kitano starts by weaving a tale that’s classic Zatoichi fare, and then subverting everything else. It’s the anti-Kitano film in that the style is not the elliptical minimalist style we’re use to. Here it’s filled with beautiful cinematic shots more reminiscent of Mizoguchi, with incredible attention paid to the period settings detail. Narratively, there’s no drawn out title sequence or introduction to characters. One shot, one title, and then BAM, sword fight. And when characters are introduced, there are no melodramatic monologues detailing the tragedy that may fill their lives, but a visual depiction through flashback. 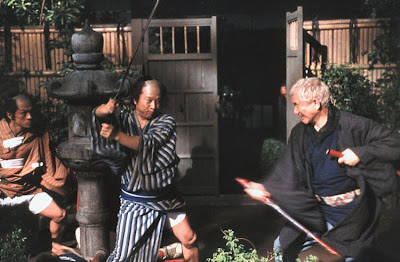 Kitano doesn’t try to emulate Shintaro, which would have caused the instantaneous failure of the film, but instead he reinvents the character, making him less proactive in his battling of bad guys, and making more him amoral. If the old Zatoichi waited for Greedo to shoot first, this one doesn’t. He prefers to end swordfights before they even being. The bleach blonde hair ends up being a nice touch, as does the reworking of this cane sword. He technically subverts the series, using the vista shots that feature Zatoichi wandering the countryside as a means to entertain with music and movement. It seems like Kitano knew he was making a film to entertain, so he instilled every frame with some small moment of pleasure. Even the sword fights are instilled with a comedic sense.

The film is so familiar to those who love Zatoichi, and yet is so filled with Kitano’s visual inventiveness and charm, its usually breathtaking. Whilst it may be short on narrative depth, its Zatoichi distilled down to its bare essentials. Kitano himself has stated that there are four parts to a Zatoichi film.

1) Zatoichi enters a small town. The encounter is typically the work of fate and/or chance. Here, the blind masseuse wanders the countryside, until his own good nature lands him in a small town, shelter provided for by an old woman he assisted on the road.

2) Zatoichi meets the townspeople and the bad guy. He soon learns that the town is terrorized by several gangs, each charging excessive amounts of extortion money from the residents. He begins spending his time in the gambling hall and the local watering hole, meeting among others a shamed ronin named Hattori Gennosuke (played by Tadanobu Asano) who is looking for work to pay for his sick wifes medicine, and a pair of Geisha sisters who are more than meets the eye. Here he subverts the series again, by creating the role of Zatoichi’s primary swordbearing protagonist Hattori as incredibly sympathetic. Kitano himself even takes a backseat for a fair bit of the film, allowing the always popular Asano to take the forefront. This film isn’t just about Zatoichi.

3) A lot of fighting. From the opening scene until the bloody final battle, the film is littered with numerous blood soaked encounters, although they are typically fast and short, another subversion of the genre that usually had things drawn out and protracted.

4) The happy end. And boy does he come through on this. Probably the most unexpected part of the film, but easily the best.

Despite the simple story, its evident the film is made by a master of cinematic storytelling. When I first saw the film at a festival in South Korea, it didn’t have subtitles, and yet I was thorough absorbed and entertained from start to finish. If a film can transcend language, it’s a sign there’s something great going on with it.

Read more by Matthew Hardstaff at his blog.
Posted by Chris MaGee at 12:18 AM