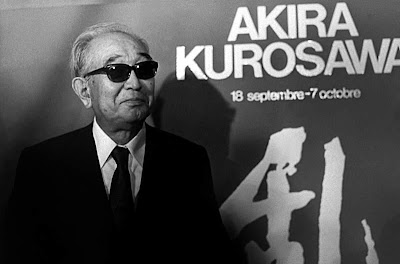 It was a century ago today, March 23rd, 1910, that a boy was born to Isamu and Shima Kurosawa in Tokyo. Isamu was a director of a junior high school and head of the Japanese Amateur Sports Association and he and Shima were already the proud parents of four daughters and three sons. They named this new addition to their family Akira. As a boy Akira liked to draw (he won various school competitions for his work), but his real love was motion pictures. He was introduced to the movies through his older brother Heigo who was a benshi, a narrator of silent films. Heigo's suicide in 1933 devastated Akira, but in honour of his brother and in keeping with his love of films he enrolled as an assistant director at PCL Studios. PCL would eventually change its name to Toho and produce such monumental films as "Stray Dog", "Seven Samurai", "Ikiru", "Yojimbo", "Sanjuro" and "Ran"... all directed by Akira Kurosawa.

Kurosawa gifted us with 30 films over a 50-year filmmaking career, defined Japanese cinema for Western audiences, and his influence has been acknowledged by directors as diverse as Sergio Leone, George Lucas, Bernardo Bertolucci, Steven Spielberg, and John Woo. The lives of all of us here at the Toronto J-Film Pow-Wow would be very different and far less rich without the films of Akira Kurosawa, so today we ask that you all raise a glass for a kampai in honour of what would have been the 100th birthday of Kurosawa-kantoku, The Emperor. Then make sure to pop your favorite Kurosawa film into the DVD player!
Posted by Chris MaGee at 8:39 PM