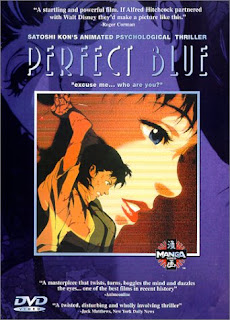 Satoshi Kon’s acclaimed “Perfect Blue” is one of the more unconventional critiques of popular culture viewers are likely to encounter – and not only because it is an anime. It follows young Mima Kirigoe, a minor pop star who decides to leave her girl group CHAM and music career for acting instead. As she makes the transition into “Double Bind,” a television series about a serial killer, she discovers a web site called “Mima’s Room” which contains disturbingly detailed diary entries describing her daily activities and inner thoughts regarding her doubts about the show. As her part becomes more prominent, she is tormented by both a sinister fan and a fantasy version of her former pop idol self.

“Perfect Blue”’s most impressive feature is the narrative complexity that is intricately exercised by Kon. He begins right away within the film’s opening moments when he intercuts Mima’s last stage performance with scenes of her shopping in a grocery store. Eventually, you realize that the grocery store scenes occur later in the evening after the concert, but it takes some time and thought to make proper sense of the initially disorienting sequence. From there, Kon only builds upon the ambiguous nature of the film, cleverly mirroring Mima’s mind frame as she becomes less certain of what exactly constitutes reality. Her perception of her own identity is significantly complicated by a number of factors – the mysterious diary entries on the site; the show’s script, which eerily begins to resemble real life; the fantasy Mima who plants feelings of guilt for her having left her pop career. The lines between fantasy and reality become more and more blurred for both Mima and the viewer in a disorienting Chinese box pattern of rehearsals and awakenings. The events presented to the viewer could be dreams, scenes from the show or reality – what the “truth” is is deliberately made ambiguous, inviting (if not demanding) viewer engagement in ways similar to such other mind benders as “ Mulholland Drive ,” “Synecdoche, New York ” and “ Shutter Island .” Mima’s fantasies are made all the more psychologically dense and perplexing by the film’s animated format. 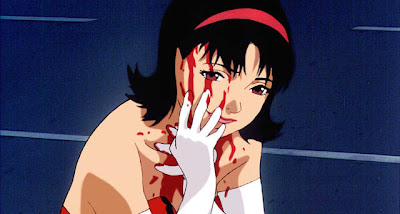 The consistent theme that lies beneath Mima’s breakdown and “Perfect Blue”’s resulting mind games is the phenomenon of fame. The film’s first scene is significantly set at a convention, and groups of fan boys are occasionally featured as they follow Mima and voice their wavering feelings regarding her career trajectory. The darker side of celebrity obsession is represented not only through the intimidating, Quasimodo-esque fan and stalker-ish web site, but also the string of incidents triggered by Mima’s decision, which include threatening messages, a letter bomb and, eventually, brutal murders. Even beyond these troubling events, the film conducts a chilling critique of fame. Mima is immersed in interviews, concerts, photo shoots and the show’s filming, her image constantly being molded and adjusted. Her exploitation reaches grotesque proportions when she is required to film a rape scene for the show, which is somehow made all the more disturbing by the pauses between takes. The way in which the simulated rape is depicted and prolonged makes all too clear the metaphorical implications of the act. Later, Mima sheds her clothes for a photo shoot which only deepens her degradation for the sake of celebrity.

By making “Perfect Blue” as an anime, Kon is able to create a detailed and impressive visual style. Befitting the important role of pop culture in the film, its Tokyo is filled with signs, billboards and stores, but not overwhelmingly so, as frequently seen in futuristic depictions of the city in sci-fi animes. Instead, it quite accurately reflects the contemporary urban landscape that society has built around itself. Other locations like Mima’s apartment and the show business-oriented spaces she lives and works in all solidly establish her world – even as she grows more unsure about whether it is real or not. The more threatening and violent events that occur around her are given a chillingly vivid quality by the animation, allowing for some memorably imaginative images without tipping too far into the realm of full-out phantasmagoria. It is this partial, careful adherence to realism and “reality” that especially helps make “Perfect Blue” so layered and rewarding. Bound to reveal more – or perhaps just raise more questions – upon repeated viewings, it is one of those rare, elegantly crafted, magnificently befuddling puzzle films that demands contemplation and appreciation in equal measure.

Read more by Marc Saint-Cyr at his blog.
Posted by Chris MaGee at 8:51 PM

Good review! The film is definitely a real eye opener into an idol switching careers in the entertainment industry and how some people can’t tell the difference between reality and fantasy.

Would you also mind reading my take on the film and commenting? There are some things I am confused about and need answers too! Plus to me, it seems like a reflection of the industry! http://nynyonlinex.wordpress.com/2012/12/05/perfect-blue/