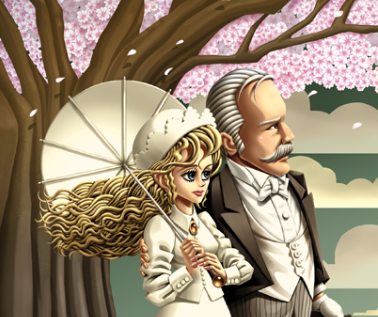 With all the flurry of activity and anticipation surrounding the 10th anniversary of Frankfurt's Nippon Connection it's easy to forget that there is another Japanese film festival taking place next month, and right here in North America to boot. The Japan Film Festival Los Angeles announced their line-up this past week, and they deserve a big pat on the back for bringing together films that really would not get showcased on this side of the Pacific normally. Yes there are mainstream hits like Takashi Miike's "Yatterman" and Tetsuya Nakashima's "Paco and the Magical Picture Book", but there are also films like Toru Ichikawa's "Sakura, Sakura" (above) that tells the true-life story of biochemist Jokichi Takamine (1854-1922), Tetsuo Shinohara's comedy/ drama "The Night of Whirlwind Restaurant" that was featured in the Japanese Eyes programme at last year's Tokyo IFF, and Nobuyuki Miyake's "Lost and Found" about the lives of commuters at a rural train station.

This year's Japan Film Festival Los Angeles will run from April 10th to 25th at three theatres in the Los Angeles area. To get details on tickets and to get a look at their full line-up visit their official website here.
Posted by Chris MaGee at 8:53 PM