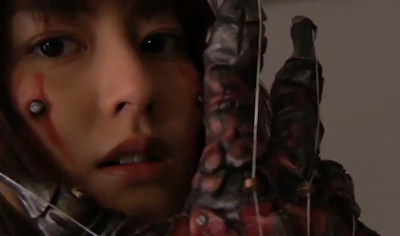 Back in January we told you about a Japanese gore fan's wet dream... and we're not talking nocturnal emissions here, we're talking gallons of bright red, iron rich blood! Three of the the biggest names in gore films, Noboru Iguchi (Machine Girl, Robo Geisha), Yoshihiro Nishimura (Tokyo Gore Police), and Tak Sakaguchi (Samurai Zombie) were joining forces to bring fans "The Mutant Girls Squad". The plan for the film was to have each director helm different parts of the same story, but here's what we didn't know before. The director continuing the story won't know what the previous director contributed. Confused? Let us clarify - "The Mutant Girls Squad" will function like a cinematic game of The Exquisite Corpse, a Surrealist game whereby someone draws the bottom of a picture and then folds the piece of paper it's on so that only the edge of the drawing can be seen. Another person continues the drawing without knowing what the first person drew. This second person, draws, folds the paper, and passes it to the next person, and so on and so forth. Once the paper is unfolded the result is a weird mishmash of styles and imagery.

I've never heard of The Exquisite Corpse being used in film before, well at least not in an over the top gore film, but it sounds like a neat concept. Makes you wonder what the twisted minds of these three directors (and frequent collaborators) will come up with. Thanks to Todd Brown at Twitch we can now take a peek at how this experiment played out. He posted the trailer for "The Mutant Girls Squad" this past week and while you have some of the standard "Tokyo Gore Police" and "Machine Girl" imagery represented there's also a whole lot of new weirdness added to make things interesting. An homage to "Nightmare on Elm Street" baddie Freddy Krueger's knife fingered glove? A little bit of taiko drumming by the Mutant Girls of the film's title? A cameo by none other than Osamu Tezuka's Astro Boy? It's all here to see in the trailer for "The Mutant Girls Squad"... oh and lots of blood too.

Head over to Twitch to check out the trailer here and find yourself asking the same question I did... Why didn't they just call this film "The Exquisite Corpse Girls"?
Posted by Chris MaGee at 2:46 PM