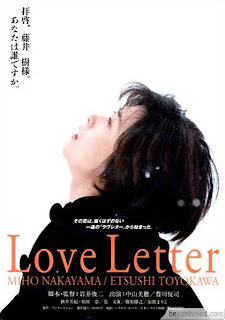 Several years ago, a young man stopped by my office at work and introduced himself by saying "Hi, I'm Bob Turnbull. I think I have your pay stub...". It's one thing to be the namesake of your father (not to mention sharing names with your Grandfather and a cousin - the Scottish people are not the most imaginative givers of names), but it's a bit of an odd feeling to meet a stranger who also shares your title. So imagine how young teenager Itsuki Fujii felt on the first day of a new term when the teacher called out her name and she found out that someone else in the class shared it. And that he was a boy.

Though "Love Letter" starts its story years after that particular embarrassing event, it eventually circles back to it and a fuller picture of an odd love triangle comes into focus. Shunji Iwai's feature film debut actually begins at a memorial service years later for the male Itsuki Fujii. It's been 2 years since a mountain climbing accident took his life and his former fiancee Hiroko Watanabe is still coming to terms with his passing. While leafing through some old high school yearbooks at his mother's house, she comes across his old address from a small Northern town. His mother tells her that the house is long gone, but Hiroko writes and mails a letter to that address anyway. She likes the idea that perhaps it will find its way to him in heaven. It does indeed find its way to an Itsuki Fujii - but to the female version who still lives in that small town. 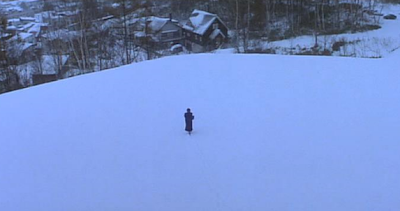 From here, a correspondence arises between the two women (both played to perfection by Miho Nakayama). Hiroko wants to know what her fiancee was like when he was younger, so Itsuki relates to her various stories about her occasional and awkward encounters with the boy that caused her much embarrassment (you can imagine how their classmates would play up the naming coincidence). The film jumps between the current lives of both Hiroko and Itsuki as well as flashing back to the high school days of both Itsukis. Over time, the two women begin to come to different understandings of their relationships with Itsuki and it allows both of them to take new steps with their lives. The current day Itsuki begins to see that the annoying and odd behaviour of a teenage boy (writing his name in never checked out library books, putting a bag over her head while she is on her bike, etc.) may have actually been his way of showing his love for her. Hiroko, for her part, begins to wonder if perhaps he fell in love with her because she reminded him of the other Itsuki.

Iwai is more famous for 2001's "All About Lily Chou-Chou" and also helmed one of the short segments of the recent omnibus film "New York, I Love You", but he shows a sure hand right out of the gate with 1995's "Love Letter". Though initially you aren't completely sure who is who, what happened in the past and why two different characters look remarkably similar, there's something about Iwai's scenes and pace that give you that comfortable feeling that everything will fall into place. And it does. Just enough information is provided to keep you involved from scene to scene until you are firmly engaged and pleasantly surprised at each new turn. He uses many parallels between the stories (occasionally it's a bit too coincidental in nature, but that tends to work fine in good melodrama) - not just in events or characters, but also when cutting between them by matching similar actions. Iwai also takes advantage of some lovely snowy and wintry landscapes in Northern Japan as the story plays out and films everything with a soft focus that seems to emphasize the melancholic aspects of the story. Of course, with story elements such as these, it would be easy to fall into over the top melodrama. Fortunately Iwai is able to pull it back enough to let the melodrama work. The music occasionally threatens to overwhelm, but Nakayama pulls things off effortlessly in her dual role - not only does she play the more emotional moments with fine subtlety, but she also manages to make her two characters quite distinct. It's not just the clothing and hairstyles that distinguish them, but also mannerisms, expressions and ways of communicating.

"Love Letter" is a lovely, bittersweet film that manages to show that there is always the chance to change your life or start one anew. It might be an occasionally painful ride, but if you can manage some hope - even from unlikely sources or coincidences - you've got a chance to get to where you want to be.

Read more from Bob Turnbull at his blog.
Posted by Chris MaGee at 2:44 PM