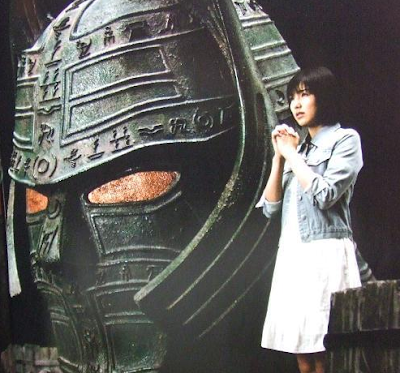 It was last May that we reported on how Kimiyoshi Yasuda's 1966 kaiju film "Daimajin", which told the story of a giant stone statue that comes to life to protect a village from an evil lord, was going to be adapted into a series on Tokyo TV. At that point there were only a few tantalizing hints being dropped by the folks at Kadokawa who were producing this new series. Now, with "Daimajin Kanon" due to premiere on Tokyo TV on April 2nd Kevin Ouellette has got the full trailer for the 26-episode series posted over at Nippon Cinema.

From the looks of the trailer the series recaps Daimajin's battle against evil yokai during the Edo Period and then jumps ahead to the present day when these same yokai spirits return to menace the country. 21-year-old actress Yuka Rikuna (above) plays the girl who appeals to the stone statue to come to life once more to protect Japan. Seems like there's enough tokusatsu, kaiju, and martial arts action in "Daimajin Kanon" to keep fans of "Ultraman" and "Godzilla" happy for hours.

You can check out the full trailer for "Daimajin Kanon" here.
Posted by Chris MaGee at 2:42 PM