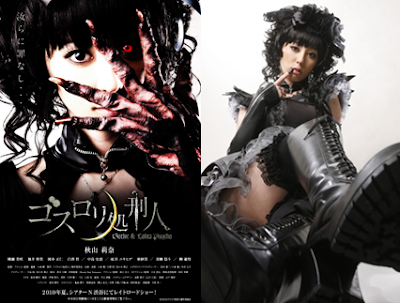 I give a lot of flack to Japanese gore films. I admit it. I know it makes me seem like some kind of stuffy old fart who'd rather see Ozu up on screen than someone getting their head sawed off by a dull katana, but that's me. Way back in December when we reported that "Geisha vs. Ninja" director Go Ohara was going to be making the Goth-Loli-themed "Gothic & Lolita Psycho" I ripped into it, but thankfully our Eric Evans was there to give me the what for. You can read my original post here and you can also read the thoughtful and persuasive comments posted by Eric that accompany it. It's a really good point/ counterpoint argument.

So, a littl straight reporting on the new plot details that have come to light about "Gothic & Lolita Psycho" that have come to us via Nippon Cinema. The film seems like a pretty straight ahead revenge tale - Yuki, portrayed by Rika Akiyama (above right), is a happy high schooler until her mother is brutally killed by a gang of assassins. Cue the misery and The Smiths albums... okay, I said this would be straight reporting, sorry. Seeking revenge for her mother's death Yuki dons a Goth-Loli persona complete with death-dealing lace umbrella that transforms her into a wrathful demon. Soon enough she out and kicking some assassin ass. Her new black-on-black motto - "Suffer no guilt, ye who casts judgment in the name of God."

Okay, a bit of my opinion here which Eric will hopefully provide the counterpoint for. Is "Gothic & Lolita Psycho" smart marketing? Damn right! While films like "Machine Girtl" and "Tokyo Gore Police" have a huge fan base with goth and goth-friendly folks, Ohara's new film is aimed right to that crowd. Definitely a smart move. I have to chime in and say that this film comes at an interesting time though, seeing that Major manga artists in Japan are protesting anti-Loli laws in Japan that will (and I think rightly so) prevent sexual images of underage girls in anime and manga. Very interesting bit of synchronicity there.

More on "Gothic & Lolita Psycho" as it comes, which will hopefully include a trailer in the very near future.
Posted by Chris MaGee at 6:36 PM

I can't offer up a defense for it until I see it, but I can plead for an open-minded approach. These J-splatter films can be very good ("Vampire Girl Vs. Frankenstein Girl" was essentially cultural satire, and laugh-out-loud funny; "Machine Girl" was pure, joyful cinematic craziness) or very bad ("Hard Revenge, Milly" was essentially charmless; "Samurai Princess" was sub-mental), but they deserve the benefit of the doubt, right? Any idea can be good depending on the execution. This Goth-Loli thing looks promising, particularly if they get the supernatural angle right--it could be a J-film "Jennifer's Body", but with more bite.