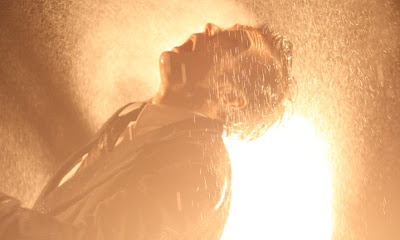 There have been a lot of mixed reactions to Shinya Tsukamoto's "Tetsuo The Bullet Man", the third film in the director's series about men morphed into machines that began with his career-defining "Tetsuo The Iron Man". While I have yet to see the film myself I think that it would be a mistake to view "Bullet Man" just through the lens of that original 1989 film. Tsukamoto has mentioned that "Bullet Man" was his attempt to create his own version of a Hollywood film, or better put - to subvert a Hollywood film. With the full Japanese trailer for "Tetsuo The Bullet Man" doing the rounds online I think that that's very apparent. From the casting of American actor Eric Bossick as Anthony, a businessman living in Tokyo whose son is killed, to the conspiracy theory roots of his character's transformation from man into machine (turns out Anthony's father worked on a secret U.S. project in post-war Japan) the trailer is totally Hollywood - but it's totally Tsukamoto at the same time. The epileptic camera technique, gun-metal gray colour palate, and the skull crunching soundtrack by Chu Ishikawa. It's hard to mistake this for anything but a Tsukamoto production.

That being said check out the full Japanese theatrical trailer for "Tetsuo the Bullet Man" below to make your own decision. The film will finally be getting a Japanese release this May.

It is fascinating to trace the arc of the Tetsuo films, and this is such a logical progression. It's got to be daunting filming in English considering how many Western fans he has. Eric Bossick is certainly going to have a lot of critical eyes on him.